Aggressive Strain of EHV-1 in Valencia: "Most Serious EHV-1 Outbreak in Europe for Decades" 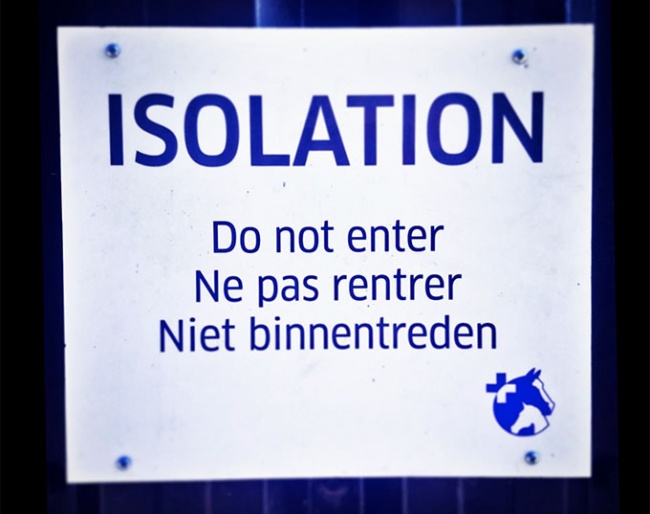 The news from the show jumping world is now trickling into the dressage world and effecting horse sport in Europe. The FEI has now called the Rhinopneumonia outbreak at the Valencia Tour "probably the most serious EHV-1 outbreak in Europe for decades."

The Valencia showgrounds, where the 2021 European Children, Junior and Young Riders Championships will take place this summer, has been hosting non-stop international jumper competitions since 28 January.  A massive amount of horses has been coming and going there for weeks, but now all activity has grounded to a halt as a highly contagious has spread over the show grounds.

The Spanish Veterinary Authorities are in charge onsite in Valencia and the FEI Veterinary Department is driving coordination of both the onsite and wider measures in direct cooperation with the Spanish National Federation.

Distressing images and footage of extremely sick horses in Valencia have spread on social media.

The treatment of horses on venue has been vastly improved with additional veterinary support and medical supplies, with a total 21 veterinarians now onsite. Over the weekend, the FEI ordered extra stabling so that healthy/recovered horses can be better separated from sick animals on venue to prevent further transmission.

Support from France, Switzerland, and Germany

A total of 44 temporary stables, which are being transported from the South of France, are due to arrive onsite today and 22 boxes will also be supplied to the Valencia Equine Hospital in order to free up emergency treatment permanent stables. Additionally, the French National Federation and the FEI have coordinated a supply of inflatable support mats to assist recumbent horses to stand.

Rescue nets and emergency slings are being sourced from Switzerland.

In France all competitions - national and international - have been cancelled until 28 March 2021 because four Rhino cases have now been directly linked to Valencia.

The FEI stated that, "as this strain of EHV-1 is particularly aggressive and there are now confirmed related outbreaks in France, Belgium and Germany, we remain concerned that several sick and in-contact horses left the venue before it was closed for departures and that they may spread the disease."

All Horses from Valencia Need to be Isolated

Although the FEI has blocked all these horses in the FEI Database until the required testing protocols have been fulfilled, the FEI has again directly contacted National Federations with horses that participated in Valencia requesting confirmation that they have contacted all their athletes that were in Valencia, that their national veterinary authorities have been informed about the outbreak and the returning horses, and that the necessary isolation of returning horses and in-contact horses has been put in place and compliance is being controlled.