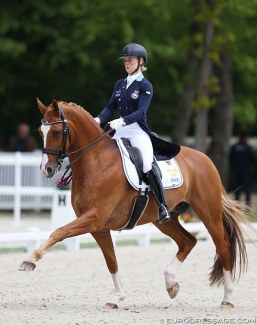 Wall Street JV is a 14-year old Hanoverian gelding by Wie Weltmeyer out of Scarlett (by Starway x Wendel x Woerlin). He is bred by Hans Vilhard.

Wall Street JV sold as a young stallion to Juan Vazquez in Spain.

The duo made its CDI debut in the spring of 2012 in the 5-year old young horse tests at the CDI Vidauban.  In 2013 they competed in the 6-year old classes at the CDI Madrid. At the 2013 Spanish Young Horse Championships they were 13th in the Finals for 6-year olds.

In 2015 they moved to small tour level and campaigned at the CDI Barcelona and CDI Oliva to mixed results. They did, however, win the 2015 Spanish Small Tour Championships. It was their last show together.

Wall Street JV sold to Spaniard Agusti Elias, who resold the horse six months later to Swedish Juliette Ramel as a gelding in the autumn of 2015.

Ramel decided to focus on confirming the horse at Grand Prix level first, although their international debut was at small tour level at the 2017 CDI Aachen.

Their international Grand Prix debut was at the 2018 CDI Compiegne, followed by the CDI Aachen Dressage Days, where they were second in the Grand Prix with 72.239%.

Ramel and Wall Street's most active season was 2018 with further starts in Rotterdam, Falsterbo, Flyinge, Herning and Stockholm.

In 2019 they competed in 's Hertogenbosch, Joosland, Compiegne, Geesteren and Falsterbo. Their last competition start was the Nations' Cup in Falsterbo in 2019, where they were second in the Grand Prix Special. They were selected three times on the Swedish team for a Nations' Cup.

Wall Street JV has moved back to Spain to Agusti Elias in the autumn of 2020.

Although the horse is listed as sold to Agusti's father, Quirze Elias, in the FEI database and Agusti initially confirmed the sale, Ramel's company La Pomme continues to be the owner.

The Barcelona based Elias is preparing for his competition debut on the talented chestnut.

"I am very excited to start this partnership with Wall Street JV," Agusti told Lilyforado.com. "I want to try for the Olympic spots. I am aware that it is going to be difficult and I may not be able to do it, but I will try. It is a horse that will give me more experience and I am going to learn a lot with him. I am ambitious and with Wall Street JV I want to continue learning "