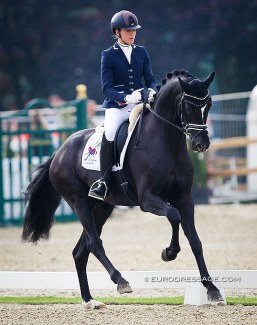 German professional dressage rider Johanna Klippert has decided to resign from her position as head rider at Stallion Station Holkenbrink and begin a new chapter at Hof Borgmann.

The 37-year old Klippert is certified in Equine Business Management and joined the team at Holkenbrink as their official trainer in 2011.

Holkenbrink and Klippert's first major success as a joint venture was Johanna winning the 2012 Bundeschampionate aboard Franziskus (by Fidertanz x Alabaster), who is now a German A-team member under Ingrid Klimke.

Klippert continued to be highly successful in national young horse sport, riding two more horses to silver medals at the Bundeschampionate: Hollister (by Hotline x Don Frederico) in 2014  and Fashion in Black (by For Romance x Lauries Crusador xx) in 2019.

After 9 years of national showing, Klippert finally made her international show debut in the young horses at the 2020 CDI Hagen last summer. She steered Fashion in Black to a third (84.20) and fifth place (80.60) in the FEI 5-year old tests.

After 10 years at Holkenbrink stallion station, Klippert is ready for a change and has accepted the head riding job at Hof Borgmann, which became vacant after Portuguese Ana Teresa Pires left.

"After ten nice years at Holkenbrink I can look back on nice times. The win with Franziskus at the Bundeschampionate, two reserve champions in Warendorf with Hollister and Fashion in Black NRW and bringing out a lot of young horses and to get the chance to win also in S dressage. I am happy to have had this chance," Klippert told Eurodressage.