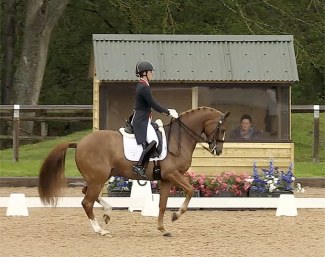 After winning the Grand Prix on Wednesday, Charlotte Dujardin and her green GP ride Gio went for seconds, claiming victory in the Grand Prix Special at the 2021 CDI Wellington in Hampshire on Thursday 13 May 2021.

The inaugural international dressage competition in Wellington, Great Britain, drew out Britain's best as the big tour was marked as an Olympic qualification class. Team contenders are putting particular focus on practising the Grand Prix Special as that test will count for the team medals at the Olympic Games in Tokyo.

Dujardin and her number one star in the barn, Mount St. John Freestyle, rode the Special tour at the CDI Hagen less than a month ago. Now it was Gio's turn to prove his valour in the Special on home turf. The class was judged by a 5* star panel, including Mariette Sanders-Van Gansewinkel (NED), Maria Colliander (FIN), Isobel Wessels (GBR), Susanne Baarup (DEN), and Peter Storr (GBR).

From the 31 combinations that contested the Grand Prix, fifteen moved on to the Special.

Dujardin and her own and Renai Hart's 10-year old Dutch warmblood Gio (by Apache x Tango) won the Grand Prix, unexpectedly beating stable mate Freestyle who had an atypical run of errors in her test. That new found smell of victory had a lasting effect in the Special as all five judges unequivocally placed the pair first with scores ranging from 79.681% to 83.298%; the two highest marks not surprisingly coming from the two British judges. Finnish judge Maria Colliander, who has developed into the judge often portraying the sense of reasoning, had them at 79.681%.

The chestnut pocket is a fun and sympathetic horse to watch, working his heart out in the test and obediently carrying out his rider's wishes, but his greenness is acute and he looks like a toddler at Grand Prix, his legs are still all over the place. One third of the Grand Prix Special is a passage - extended trot tour and let it be the latter movement, which is still in desperate need of development. Gio gets very hectic, quick and short in the extended trots instead of lengthening the stride and frame and gaining momentum. There are no less than four extended trot lines in this Special and Gio remarkably scored 7s to 8s for that movement, each time. The passage right was ridden a bit too forward, but overall it was really nice and regular. The trot half passes were outstanding. Dujardin held her hands more quietly today as the horse stayed a but more open in the throatlatch and needed less correction. The extended walk had enough overtrack, but there could be more striding through the back (6.5 - 7.5), the collected walk was just short (7 - 8-. The first piaffe was a bit hesitant, the second started great with uphill tendency, but then he leaned on the forehand again. The canter strike off was a bit tense. It's impressive how Gio, for his size, gains so much ground cover in the tempi changes, both in the ones and twos. He hurried a little in the pirouettes and the final piaffe at X was still insecure, with the hindlegs crossing (7.5 - 8).

Gio is certainly a lovely young horse in full development, but it seems the judges are panting to have another 80% scoring wonder in the arena despite Gio's immaturity at Grand Prix. After the CDI Wellington, Dujardin can rest assured she has that second big gun in her hands and a firm grasp on her British Olympic team spot, no matter what.

Another young Grand Prix horse the judges have taken a liking to - especially the British one - is Gareth Hughes' 11-year old Oldenburg gelding Sintano van Hof Olympia (by Sandro Hit x Silvano N) which he co-owns with Judy Williams.

Don't be mistaken, the handsome bay gelding and his sympathetic rider are very pleasing to watch and there is much more in the tank, but the horse does not yet have that full power from behind, the "ludicrous" mode switched on Tesla drivers would say. The right hind leg often trails behind in the passage and in the extended trots he becomes uneven and wide behind. As that strength and, therefore, self carriage from behind is not yet there, he also often nods with the head and could be more steady in the contact. That being said, the trot half passes were mega, the extended walk very good and the piaffes were much better today than in the Grand Prix, especially the second was really nice on the sport, coming up in the withers. In the tempi changes the horse stays croup high, but the ones were nice and straight. The flying change after the extended canter and the first one of the nines on the centerline were crooked. They finished with a good, rhythmical piaffe at X, but the end halt was not immobile (6 - 8).

The combination rode a well put together test, polished and with no big mistakes. Dono di Maggio stayed in rhythm in all trot extension and his passage work was very expressive, off the ground and regular. There was good crossing in the left half pass. Overall in the trot work one would wish Dono di Maggio to be a bit more elastic in the back, especially in the loin section so he can swing even more in the extensions. His extended walk was a bit limited with one hoof overstep with the horse seemingly distracted by the surroundings. There was a very nice rhythm in the piaffe-passage section with seamless transitions. The piaffe has lots of airtime and spring, but the balance could be better. The two tempi changes were big, the ones ok. The pirouettes were small with the left one being the better one. Faurie finished his ride with a neat final centerline.

Faurie's scores were quite interesting with four judges rewarding the test between 74.681% and 76.702%. However British judge Storr was, in this case, the lowest one with 73.298%.

It started with a break into canter in the first trot extension, but Hester recovered quickly and rode lovely half passes and real, soft-footed passage. The other trot extensions were cleverly ridden, even though the horse does not always achieve sufficient overtrack. The walk part is always risky with this horse. This time there were two hooves overstep but the V-moment in the rhythm needs to be longer to score higher. in the collected walk he paced several steps before the piaffe (5 - 6). In the first piaffe En Vogue travelled too much forward and did not achieve suspension (7.5 - 8), in the second he refused and swung round. Hester stayed cool as a cucumber, rode the movement again, but the passage became tense (7 - 8) due to the horse's momentary brain freeze. Carl kept calm and carried on, as British men do. The canter half passes were superb, but the flying changes short. The two tempi's were lovely and straight, but in the extended canter the horse got a bit stiff in the back. The left pirouette was a strong one, the right one could have more lift in the forehand. There was a loss of rhythm in the piaffe at X, but the final passage was nice.

The next stop for three British team contenders is the CDIO Compiegne in France (26 - 30 May), where Charlotte Fry, Emile Faurie and Sonnar Murray-Brown are entered to compete.