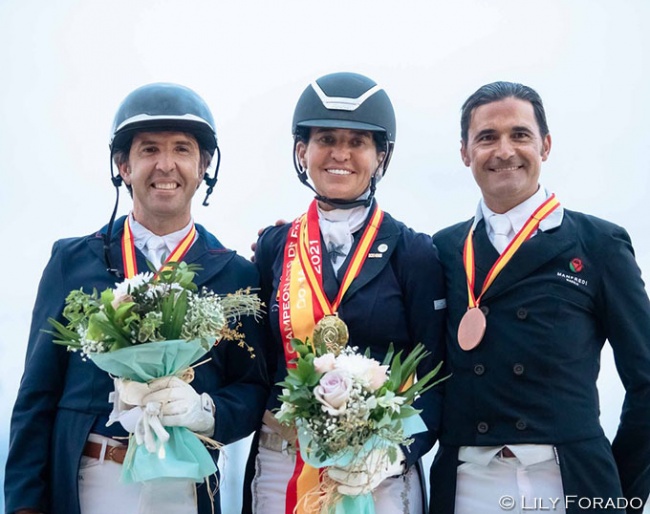 For four days spectators enjoyed the incredible performances from the best riders of Spain at the National Dressage Championships on 3-6 of June 2021. Oliva Nova hosted the Spanish Championships (Big Tour & Small Tour), as a warm up for the upcoming European Youth Championships in July.

Claudio vs. Beatriz, but Bea continues her Reign

On Saturday afternoon from 5:50 p.m. to 8:30 p.m., Oliva Nova was packed. The crowd witnessed one of the most exciting finals to date. The atmosphere was electric and the air was thick. The days before Claudio Castilla won the Grand Prix but Beatriz Ferrer-Salat the Grand Prix Special. The Freestyle became the final battle of the clash of the Spanish titans.

Starting last, Beatriz Ferrer-Salat presented her new kur and had to beat the 80.810% of Claudio in order to reconquer her title. To the sound of a compendium of classical opera music, Verdi 100%, the trumpets of the triumphal march of "Aida", or the chords of "La Traviata" accompanied the movements of the rider in a spectacular way. Both at choreographic and musical level, the commendable force of each stride was pure poetry on the dance floor. Beatriz and Elegance (by Negro) performed an imperial and triumphal dance with an epic end. The last piaffe pirouette was a delirium of emotion, giving all witnessing goose bumps. With 83.065%, Beatriz magnified and perpetuated her reign.

For the sixth year in a row, the Olympic rider brought the championships to a culmination with her performances as the icing on the cake. Once more she has been crowned  Spanish champion. One month before the Olympic Games, Beatriz Ferrer-Salat continues to increase her resume. Beatriz won her sixth consecutive gold in the Spanish Championship and her ninth title in her professional career.

The silver medal went to a distinguished rider. We are talking about Claudio Castilla with Alcaide (by Lobito). With Spanish melodies, the Andalusian rider surpassed expectations and produced an exquisite ride. Throughout the championship, the Lusitano Alcaide showcased superb extensions in trot, great uphill tempi, and sublime transitions of pi-pa. He achieved an 80,810%, in the freestyle and overall a 230.540% allowing Claudio to win his fourth silver medal with Alcaide (2015, 2017, 2019 and 2021).

José Antonio García Mena claimed the bronze position with Sorento. While last season he opted for Benzi Landro, this edition Sorento did the honors and performed the waltz (79.375%). Happiness in its purest form is what José transmitted in each stride. With now two Grand Prix horses to ride - Sorento and Divina Royal - Mena is over the moon. The group of horses he has and the ones coming along are very competitive, powerful and hints the great future he will have in the coming years.

Finally Beatriz Ferrer-Salat achieved a total of 232,937, followed by Claudio Castilla with 230,540 and taking the last step of the podium José Antonio García Mena 225,596.

The winners are the ones who write history, but the others did a sublime job too. Touching the medals, Juan Antonio Jiménez along with Euclides MOR is the perfect synonym of consistency and solidity. The son of Riopele is a safe bet. His progression in recent years speaks for itself. His exquisite piaffe is something from another planet.

A new talent for the following year is confirmed: Romero de Trujillo (by Enganoso VI). Being one of the most exciting rookies, the white pearl of American P.R.E breeder Yeguada Trujillo has stormed to the fifth position in its first championships at big tour level. Scoring above 70% in the three tests, on the Freestyle day they achieved a powerful 76.555%. There’s not much we can say about this combination that isn’t positive; from conformation shows winning everything to impressing in the highest level of Grand Prix in their first season.

From Iberian to Iberian, the jewel of Yeguada Arroyomonte's crown, Joya FS, never ceases to amaze. Alberto García-Briñón and Joya FS form an symbiosis. His musical score was 74.370% and ended up sixth in the championships.

One of the horses that impressed the audience was the Lusitano, Gasoso, ridden by Jonathan Bautista. His passage teleported you to the expressive strides of the famous Invasor, art in its purest form.

Cristobal Belmonte had his swan song on Diavolo de Laubry. Present in the last nine championships, season after season this combination has cantered  through an infinity of arenas, 2017 being one of the best seasons with CDIO Aachen and European Championships on their tally.

Guillermo García Ayala and Yeguada Susaeta’s P.R.E stallion, Poeta de Susaeta  (by Cacique IX)  were a league of their own finishing at the top of the leader board far ahead of all competitors (215.217).  García won the PSG and Intermediate I with very solid scores. The pair posted, 71.324 and 72.118, respectively.  He returned home with his first national title, a big accomplishment in his career. Poeta de Susaeta has been undefeated at every show he has done this season. However this changed in the freestyle, as Lucia Gallardo with Hip By Johnson ( By Johnson) jumped in the classification and won the musical test with a 73.305%

The Silver and Bronze medals became a remarkably interesting fight. Juan Matute and Galactico (by Quaterhall x White Magic) sealed the second position in PSG and Intermediate I, but in the freestyle, he dropped to sixth position. Juan de Dios Ramírez with Quarlito Von Nymphenburg (by Quaterhall x Rotspon), did not disappoint, ending his championship on a much better note after the bitter taste of last season.   Matute’s overall total of 210.958 points sufficed for Silver and Juan de Dios Ramírez closed the podium with a 209.381

This edition of the Spanish Championships was one of the best yet, showing not only that Spain's horse/rider combinations are performing at top level, but also that there is a bright future ahead with younger combinations developing in a grand way.