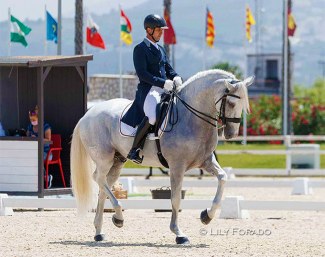 Up-and-coming equestrian team Yeguada La Pasión caused quite a stir at the 2021 Spanish Dressage Championships with rising duo Jonathan Bautista and Gasoso grabbing 12th place out of 34 participants on their debut appearance at the National Championship.

The event took place over the weekend of the 4 - 6 June 2021, at the illustrious MET equestrian facility in Oliva Nova near Valencia, Spain.

Thirty-four riders qualified for the national Grand Prix Championship, organised by in2strides. The overall ranking in the senior championship at Grand Prix level were determined by the collective results in the Grand Prix, Grand Prix Special and Grand Prix Kür, ranking the best horse-rider teams in Spain.

Bautista and Gasoso were the first pair to enter the arena in the Grand Prix, setting an impressive benchmark of 69%, which saw them among the top 10 riders on the opening day.

Things then got even better for La Pasión and Bautista on day two, when they broke the 70% marker to finish seventh in the Grand Prix Special.

Grand Prix Kur: it remained exciting until the end

The icing on the cake of the Spanish Championships is the Grand Prix Kur to Music, which gives riders an opportunity to ‘freestyle’ their skills, performing the movements to a self-created floorplan to the music of their choice. Points are awarded for technical skill, artistry and technical degree of difficulty in the choreography.

Unfortunately for La Pasión, a fairytale ending wasn't meant to be. Bautista, who had performed admirably throughout the competition with an exceptional level technical skill,  had a rider error in the freestyle, going off course from his floorplan, which ultimately cost him valuable points. Despite the unfortunate mistake, the newcomers, Jonathan Bautista and Gasoso, were certainly the talk of the town:

In her final show report, Forado wrote: “Another stallion that caused a sensation was Gasoso.  His passage and piaffe were impressive, with great cadence, supreme collection and balance.  His musical arrangement presented great moments, for instance in the extended gallop that turned into a beautiful piaffe pirouette.  It was all the more tragic that Jonathan Bautista didn’t get a good final results, because he forgot to present the canter half pass.”

Despite this rookie mistake, Jonathan Bautista left the Championship feeling very satisfied.  The two excellent rankings on the first two days of the show secured him a 12th place in the overall ranking amongst the best horse-rider pairs in Spain.

They ensured all eyes will be on this Yeguada La Pasión team going forward into the future.

"The Spanish Championship is over. I am extremely proud of Gasoso," said Bautista. "On the first day we reached a 10th place in the Grand Prix and then a 7th in the Grand Prix Special. Due to a mistake of mine, we didn't get the result we wanted in the Grand Prix Kür. Nevertheless, I am very proud of the performance of my superstar Gasoso and thank my supporting team from the bottom of my heart."

For more information about Yeguada La Pasión, visit www.lapasion.com or their Facebook page.