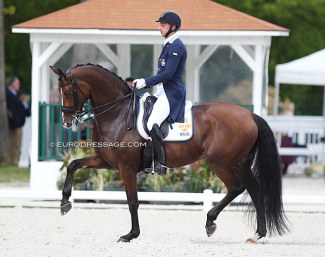 (better late than never. We've been so busy that this Grand Prix report from CDIO Compiègne and its photos ended up at the end of the queue of work tasks).

Two weeks ago the 2021 CDIO Compiègne in France welcomed some of Europe's elite dressage riders for the second leg of the 2021 FEI Nations Cup in Dressage. The event was also marked as an Olympic team selection trial by several federations, so the participants' list was packed with ringing named.

With the most gorgeous spring weather gracing the show grounds, the stage was set for a fabulous 5* Grand Prix class, which was won by Swedish routinier Patrik Kittel on his top ride Well Done de la Roche CMF (by Furstentraum x Walt Disney).

Kittel's 2021 campaign on qualifying Well Done for the Swedish team took a bit of a rocky start. The pair travelled to the CDI Doha where the mare passed the horse inspection but was then withdrawn out of fear for a possible food contamination. Their second show of the season, the CDI-W Mariakalnok, ended prematurely as the mare was rung out of the Grand Prix for blood. However, third time's a charm and in Compiègne the pieces came together.

The 13-year old bay mare looked fit, fresh and beautiful and Kittel rode a very concentrated, accurate test with so much control. Well Done's way of moving in trot is an acquired taste. She does not naturally swing over the back, but moves rather mechanically with a lot of leg lift. In the trot extensions she is hectic and gains little to no overtrack, but this is something the judges are not bothered about. The half passes are very pretty, the passage is super elegant and well suspended. In piaffe, however, she lacks balance and is uneven in the leg lift, gaining more momentum off the ground with the right front-left hind diagonal. The extended walk needed to cover more ground. The two tempi changes showed improvement, the zig zag was clean, the one tempi's were big but could be more uphill.

The judges' panel for the CDIO Grand Prix included the very experienced 5* judges Wust, Matthiesen, Verbeek, Ringmark and Hoevenaars. They rewarded the Swedis duo with 78.065% for the victory. The marks ranged from 75;435% from the Dutch judge and 80.217% from the Swedish judge.

The top three was completed by the Danish duo Carina Cassoe Kruth and Cathrine Dufour, who both brought their Tokyo hopefuls to France.

For Kruth's 10-year old Danish mare Heiline's Danciera (by Furstenball x De Niro) the postponement of the Games has been a blessing as it gave the young black mare more time to mature in the Grand Prix work. She showed many beautiful elements in her test, but the piaffe remains a problem. The mare gets tense, grinds her teeth, trembles with her lower lip, and is very unbalanced in it, crossing behind and leaning on the shoulders. The passage, however, is springy and the trot work is lovely with much elasticity and super extensions. The one tempi changes were tense and hectic, the extended canter was powerful and the zig zag well ridden. They finished second with 77.000%, although scores ranged from 75.978% (Australian judge) to 78.370% (Danish judge).

Cathrine Dufour and the 11-year old Westfalian gelding Bohemian (by Bordeaux x Samarant) landed third place. Dufour rides the sensitive liver chestnut with much feeling and softness and the horse is talented for the upper level work. In the first trot extension he was not crisp regular in the rhyth, but the horse covers good ground. The collected trot was a bit passagey and there definitely should be more bending in the corners. The passage is electric with much airtime, but in piaffe he leans on the shoulders and swings behind. The extended walk had good rhythm and overtrack. The two tempi changes could be straighter in the body, but the ones were fabulous. The right pirouette was the best one. The piaffe at X did not really come through, but Dufour piloted her horse with much tact through the test. They scored 76.500% with 74.783% (Wust) as low score and 78.152% (Ringmark) as high score.

Ramel and Fry in the Top Five

After a long break from competition with the 2019 Europeans in Rotterdam as last start, Swedish Juliette Ramel made her come back to the arena on her 15-year old KWPN gelding Buriel KH (by Osmium x Krack C) in April 2021. Compiegne was the pair's second show and they re-confirmed their quality.

Buriel is such a fabulous horse with a phenomenal canter. In the trot extensions he got a bit quick and could lengthen the frame more, but he achieves overtrack. The half passes were good, the passage work lovely. The extended walk was very limited in overstep though. In the second passage, Buriel spooked and there was a moment of resistance, but Ramel was able to push the score back up with outstanding canter work with especially the tempi changes and extended canter being mega. They put 75.522% on the board and the judges were on the same wavelength with their marks.

British Charlotte Fry is in the luxury position of having three international calibre Grand Prix horse to ride this season: Glamourdale, Everdale and Dark Legend. With her 2018 European Under 25 Champion Dark Legend, she rode the 5* tour and slotted in fifth. The long-legged 13-year old KWPN gelding (by Zucchero x Tango) broke into canter in the first trot extension and hurried in the second, but the half passes had good crossing and swing. The first piaffe travelled a bit forward as the horse gets very narrow behind, but the second pi-pa combo had a lovely rhythm. The extended walk started out a bit conservatively but improved towards the end of the diagonal. The zig zag was good, the one tempi changes were straight. Overall Dark Legend could be a bit more relaxed in the body and elastic in the back, but he produces reliable rides time and again. They scored 75.109% with 73.261 (Matthiesen) as low score and 75.9878 (Ringmark) as high score.

-- Text and Photos by Astrid Appels - NO REPRODUCTION ALLOWED

Eurodressage was on the scene at the 2021 CDIO Compiegne and we try to photograph all riders from ponies to Grand Prix. If you are interested in prints or photos for social media, send us an email with your name.