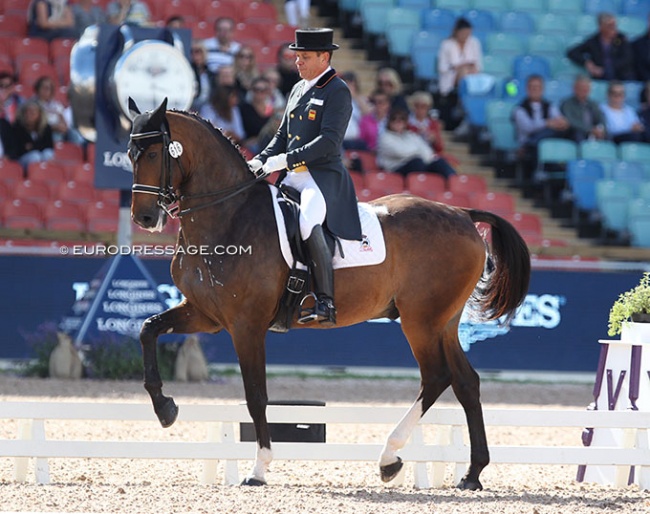 Cristobal Belmonte's former Spanish team horse Diavolo de Laubry has been retired from competition. The 18-year old did his last competing at the Spanish Dressage Championships two weeks ago.

Under amateur dressage rider Cristobal Belmonte Roldan, who is a dentist by profession, the bay gelding made their national debut at Grand Prix level in 2012 and finished in the top 5 of the Spanish National Championships that year.

Their international Grand Prix debut was at the CDI Barcelona in March 2014. The pair consistently competed at international GP level for the next six years.

Their highlight year was in 2017 when they successfully campaigned at CDI's in Valencia, Medina Sidonia, Segovia and Pompadour to be invited to the Spanish team selection trial in Aachen, Germany, where they were 27th in the Special with 66.294%. They were nominated on the Spanish team for the 2017 European Championships in Gothenburg, Sweden, as reserve riders. However they ended up representing their country after Beatriz Ferrer-Salat withdrawn and finished 46th in the Grand Prix with 65.443% in Gothenburg.

In 2019 they were short listed for the Spanish team for 2019 Europeans in Rotterdam, but not selected. The pair's last international was the CDI Jerez de la Frontera in May 2021, where they continued to produce consistent results at their level. They were 8th in the Grand Prix with 67.087% and 6th in the Kur with 69.710%.

At a national level the pair did not miss a single Spanish Dressage Championships since their first in 2013.

Their swan song was at the 2021 Spanish Dressage Championships in Oliva Nova, where Diavolo II did his last show and received a special round of applause in the final lap of honour to celebrate the horse's retirement from sport.