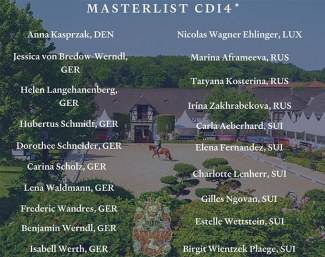 Ann-Kathrin Linsenhoff's Gestut Schafhof will be the stage for a CDI 4* competition and Germany's second and last, mandatory team selection trial for the 2021 Olympics.

Jessica von Bredow-Werndl, the winner of the first selection trial in Balve, will be there with Dalera TSF and Zaire E.

Isabell Werth is entered with four horses: Weihegold, Emilio, Quantaz and Bella Rose. In an earlier version of the Master List, Bella Rose was not included but the definite version features Werth's triple gold medal winner of the 2019 European Championships and top candidate for the team.

Dorothee Schneider, bronze medal winner in Balve, will be riding her top star Showtime, as well as Faustus and Sammy Davis Jr.

Danish Anna Kasprzak is making her long awaited CDI show come back on the 13-year old Westfalian Rock Star, whom she last competed at the CDI Nieuw en St. Joosland in April 2019.

Luxembourg's individual Olympic candidate Nicolas Wagner is doing a warm-up round in Kronberg before heading to Tokyo with Quater Back Junior.

Four Russians are competing in Kronberg in one of their final attempts to gain high scores for Olympic team consideration: Irina Zakhrabekova, Maria Shuvalova, Tatyana Kosterina and Marine Aframeeva.

The event is open to visitors but they have to register online beforehans: https://app.eventclearing.lu/attendance/155