Shona Benner Pulls out of German Team for 2021 Junior Europeans, Schwierking Steps In 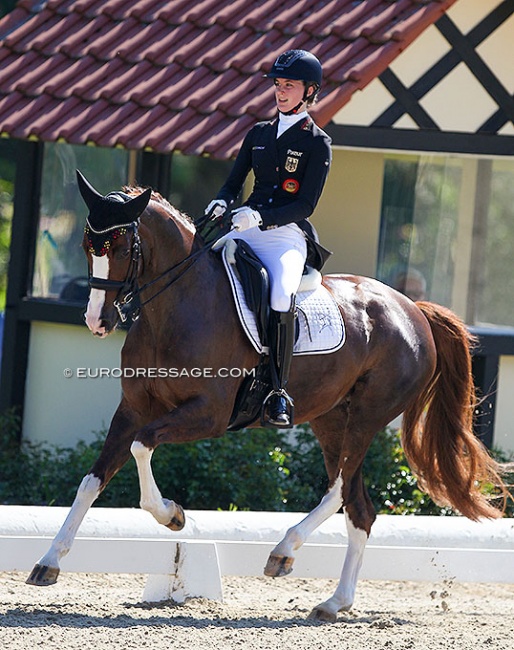 Right before departing to the 2021 European Junior Riders Championship, German pair Shona Benner and Brisbane had to withdraw for fitness issues. Kenya Schwierking and Cecil step in as reserves.

Benner announced the news of her unfortunate withdrawal on Instagram.

"With an aching heart I have to announce that Brisi and I will not be taking part in this year’s European Championships," she said. "Brisi was suffering (from) some medical difficulties which is why we have decided to take her home. My horses mean the world to me and their health is more important than anything else! We all feel much better knowing that Brisi will now be having a break to recover."

2021 has been Benner's first year as a junior rider, having previously represented Germany at the 2019 and 2020 European Pony Championships with Der Kleine Sunnyboy. This year she saddled the Ferry family's 12-year old Hanoverian mare Brisbane (by Belissimo M x Furst Heinrich) and first rode in Le Mans before heading to the German team selection trial in Hagen, where she won all three riders of the CDI-J tour and was selected on the team.

The German equestrian federation did not officially announce any team reserves when they nominated their teams right after the CDIO-PJYR Hagen, but Kenya Schwierking has been invited to replace Benner.

Kenya twice represented Germany at the European Children Championships in 2018 and 2019 aboard Dinos Boy. She only made her international show debut as a junior rider on new horse Cecil, a 9-year old Oldenburg mare by Bordeaux x Alabaster (original name Calaida) at the German team selection trial in Hagen on 10 - 12 June 2021. There she placed 8th in the team test (69.444%), third in the individual (72.353%) and 12th in the Kur (70.833%).