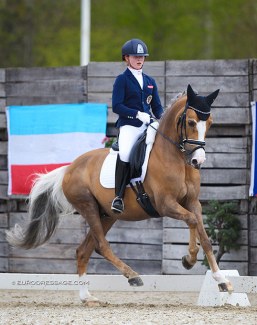 Colourfull Cannonball is a 10-year old Westfalian bred pony by Can Dance out of Nadona (by Nabucco R x Domingo x Shalom). He is bred by Mareike Teeken.

The palomino made is international show debut under Dutch Robin Heiden in the spring of 2018.

In the autumn of 2019 the gelding sold to the Swiss based Jöbstl family as a new ride for Florentina.

The new pair made its international show debut at the 2020 CDI Mariakalnok, the first international after the first corona lockdown. They went on to represent Austria at two consecutive European Pony Championships. In 2020 they were 15th in the Kur to Music finals and in 2021 they were 7th in the Freestyle finals.

In 2020 the Austrian Dressage Championships were cancelled due to corona, in 2021 Florentina and CC won silver.

The 10-year old gelding will now continue his dressage career under Leni Wächter, who often is listed on show results with her full name, Leni Sophie Louise Wächter.

She also jumps Queen Be (by Quaid x Ex Libris) and competes horse La Costo (by Licosto x Rockwell) at L-level, with whom she became the Baden Wurttemberger regional champion in the Children's division and seventh at the 2021 German Children Championship.