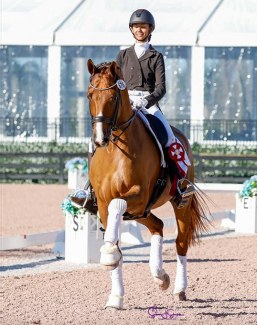 Philippine Grand Prix rider Ellesse Gundersen-Tzinberg has sold Villeroy Nord, the small tour horse that enabled her international come back to the CDI ring after the retirement of her Grand Prix horse Triviant.

Tzinberg made her claim to fame in 2018 when she piloted the KWPN gelding Triviant (by Olivi x Saluut) at the 2018 World Cup Finals in Paris and 2018 World Equestrian Games in Tryon. The gelding was retired from sport in 2019.

The American-Philippine Tzinberg, who initially trained in Europe with Charlotte Haid-Bondergaard before relocating to Florida,  blazed a trial for her country at that time. Between 2019 and 2020 Tzinberg married Florida based Danish show jumping horse dealer Henrik Gundersen and became a mom.

Ellesse returned to the CDI arena at small tour level in the autumn of 2020 aboard the now 9-year old Danish warmblood gelding Villeroy Nord (by Vivaldi x Sandro Hit). They competed at four CDI's in the winter of 2020-2021. The chestnut is bred by Danish Emilie Nordvig, and got selected for the the 2015 Danish warmblood stallion licensing, but wasn't accepted. He began its show career in Denmark under Pia Kjær Pedersen in 2017 before selling to Ellesse.

"It was really hard for me to sell Villeroy since he was my hope for Herning and Paris," Ellesse told Eurodressage, but "at the end of the day everything I own is for sale. When the right person, home and offer comes we have to consider it."