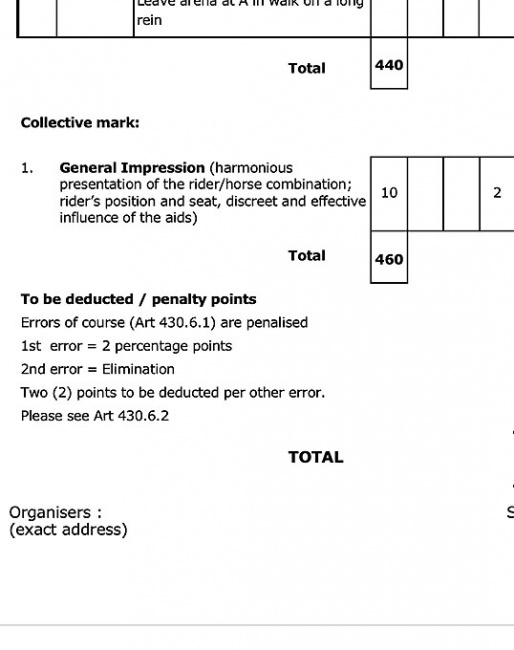 The attempt of the European Equestrian Federation (EEF) to reintroduce the collective marks on dressage score sheets has received a hard no from the FEI. The rule change will not be put up for a vote at the upcoming FEI General Assembly in Antwerp on 14 - 17 November 2021.

Removal of Three Collective Marks in 2018

In 2018, the FEI removed the collective marks for paces, impulsion and submission on the grounds that Judges could misuse these marks to manipulate the result. Only the mark for the “Athlete’s position and seat; correctness and effect of the aids” was left with the coefficient 2

The DJWG argued that the collective marks are already taken into account in the movement scores. The switch of emphasis from a movement mark - based on exactly what the judge sees at the moment of execution - to a collective note that is designed to summarize the entire test, does not aid the judge’s focus.

The EEF proposed to delete the coefficient 2 and split up the collective mark into two, and this proposal received the full agreement of the British and American equestrian federation:

The EEF proposed idea was:

After the Athlete has finished his performance, collective marks are awarded for the implementation of General Principles and for Harmony of Presentation.
4.1 The implementation of General Principles comprises
- Freedom and regularity of the paces;
- Engagement of the hind quarters;
- Elasticity of the steps;
- Suppleness of the back;
- Straightness -
Acceptance of the bridle;
- Self-carriage.
4.2 Harmony of Presentation comprises
- attention and confidence of the Horse
- harmony in the presentation of the rider/horse combination;
- rider’s position and seat;
- discreet and effective influence of the aids.

DJWG and JAG Say No

The FEI does not support the proposal to split the collective marks again.

"In line with the findings on the Dressage Judging Working Group (DJWG), the one Collective mark will be maintained. The points listed are already assessed for each movement," read the final version of the 2021 FEI rule revision document. "Both the DJWG and the JAG strongly recommended to keep the Collective mark unchanged for 2022, as the DJWG had presented strong reasoning previously as to why only one Collective mark was to be used."

Therefore this rule change will not be up for a vote at the FEI General Assembly.