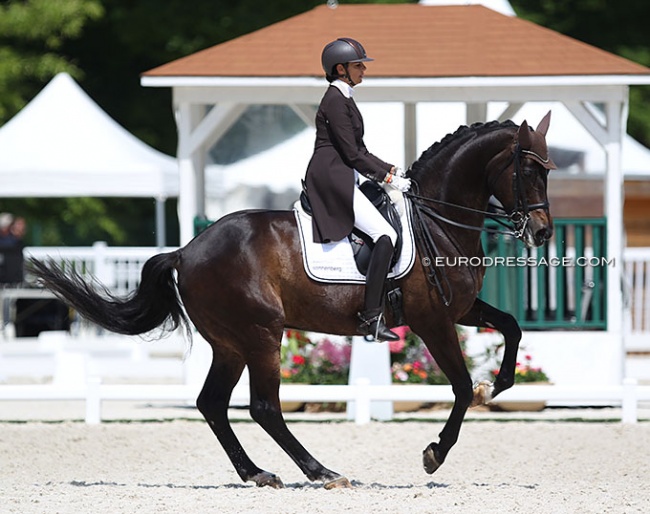 Rubin Cortes OLD was a 20-year old Oldenburg by Rubin Royal out of Carmen (by Calmiro x Eldorado x Lutteur). He was bred by Arsene Weiler in Luxembourg.

Rubin Cortes first came into the spotlight at the 2003 Oldenburg Stallion Licensing in Vechta, where he was named reserve licensing champion.

Owned by the Swiss Wespe family of Dressage Performance Centre Lodbergen, the dark bay stallion did his 70-day performance test in Adelheidsdorf in November 2004 and scored 136.31 points in dressage (2nd) and 84.89 points in show jumping (23rd) to finish third overall with 121.34 points out of 31 participating stallions.

He was first trained and competed to small tour level by German Hendrik Lochthowe. They won the 2006 Oldenburg Young Horse Championships in Rastede. They were eighth in the 2009 Nurnberger Burgpokal Finals in Frankfurt. They showed last at international small tour level in 2010. Between 2008 and 2010 Lochthowe trained Rubin Cortes under the supervision of Silvia Ikle.

The stallion spent a brief year with Edward Gal in The Netherlands in 2012 before the owner decided to give the ride on the impressive dark bay stallion to Christoph Koschel in November 2012.

Koschel made a successful international debut with the stallion at the CDI Arnhem in May 2013, landing a fifth place in the Grand Prix with 68.979% and a second with 75.575% in the kur. The pair also competed at the CDI's in Lingen, Hamburg and Arezzo.

In April 2014, shortly before her 50th birthday, Swiss amateur dressage rider Barbara Bertschinger acquired Rubin Cortes as her Grand Prix hopeful. He was pulled from stud duty and no longer bred.

Bertschinger, who own the private dressage stable and brood farm Gestut Sonnenberg in Aeugst am Albis, Switzerland, initially kept the horse in training with Christoph Koschel, who coached her for years.

The new duo made its international show debut at small tour level at the 2015 CDI Wellington in Florida, after which they returned to Europe and competed in Compiegne, Fritzens and Deauville.

The pair returned to Florida in 2016, where they made their Grand Prix debut. They consistently showed at international Grand Prix level  through 2020 with starts at CDI's in Wellington, Compiegne, Hagen, Fritzens, Lamprechtshausen, Deauville, Crozet, Ornago, and Le Mans. She last showed him in his sixth season in Wellington in 2020 for the last time. He was 19 years old then.

"Unfortunately I have not been able to save your life," said Barbara. "The only thing I can do, is thank you from all my heart, what you have done for me. I just wish , we would have had more time to spend together. Every day with you has been a pleasure! Good bye to the most beautiful, kind and powerful horse! It’s been an honor for me to have you on my side and I will never forget you."