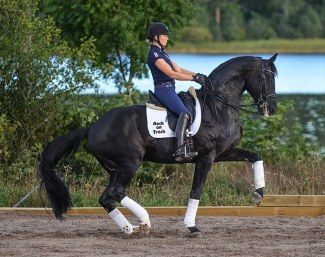 The popular Swedish warmblood stallion Dalwhinnie has passed away. He was 17 years old.

Dalwhinnie was by De Niro out of Rakel VH (by Rohdiamant x Amiral). He was bred by Birgitta and Torsten Hansson and co-owned by the breeders in partnership with Västra Hoby Stuteri.

He was amongst the top three highest scoring stallions in the 2009 Swedish Warmblood performance test.  In 2015 he was approved for the Danish warmblood society.

The Swedish warmblood stallion was introduced to competition by Mattias Jansson. The pair finished 10th in the 5-year old finals at the 2009 Swedish Young Dressage Horse Championships.

The duo began competing at small tour level at the 2012 CDI Mechelen and continued in 2013 with starts in Drachten, Fot and Odense. Jansson last competed Dalwhinnie in Sweden in November 2013 in his first Grand Prix test at the age of 9.

In 20215 Jeanna Hogberg took over the training, but she never competed him.

In September 2015 the black stallion became unbalanced in his movements and after a veterinary exam a trauma was found in the facet joint in his neck. The injury most likely happened in his stall or in the pasture.

Dalwhinnie underwent surgery on 23 October 2015 at the Helsingborg equine clinic where American surgical specialist Barrie Grant, assisted by Swede Mads Kristoffersen, stabilized the neck vertebra with the Bagby Basket procedure, so the horse could regain full mobility. It was announced that a career in sport would no longer possible but that Dalwhinnie would continue breeding.

However, in February 2018 Dalwhinnie made a national come back to the show ring under Nina Norling. She competed him at small tour level until March 2020.

He last stood at stud at Myrsjö farm near Enköping, Sweden. Unfortunately Dalwhinnie's neck injury became problematic again and in the end it was decided in the best interest of the horse to put him to sleep.

Dalwhinnie's most successful offspring are a trio of same aged horses that were all sent to Ermelo to represent Sweden at the 2019 World Young Horse Championships in Ermelo:  Michelle Nilsson on Darin, Sandra Sterntorp on Darthula VH, and Anna Zibrandtsen on Valentin.  Dartula VH (by Dalwhinnie x Coroado WL) won bronze at the 2020 Swedish Warmblood Young Horse Championships.

In Sweden  261 offspring by Dalwhinnie are registered.