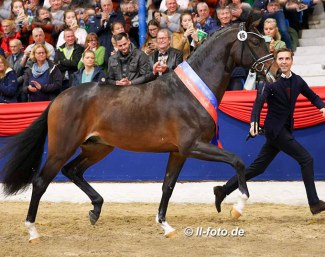 The tall, dark bay Incredible (by Indian Rock x For Romance x K2) became the champion of the 2021 Oldenburg Stallion Licensing, which took place in Vechta on 18 - 20 November 2021.

Forty-eight dressage bred colts passed the pre-selection and were invited to participate in the Licensing. Six of them dropped out, 24 of the remaining 42 were licensed, meaning more than 50% of the colts received a positive verdict.

Incredible (by Indian Rock out of Herbstromanze (by For Romance I x K2 x Schwadroneur) was named the champion stallion. He is bred by Andrea Beckheim at Gestut Reichshof and was bought as a foal by Kerstin Klieber and Stefan Sandbink. They presented him at the pre-selection, after which he sold to Andreas Helgstrand and Stutteri EVO.

With a lof of social media hype and claqueurs at the licensing, Incredible became the crowd's and judges' favourite.

Oldenburg's breeding director Bernhard Thoben said about the champion: "When we were just standing here together the phrase 'the king enters the track' came up. That is certainly a bit like that. A stallion endowed with great grandeur and an incredible amount of charisma, highly modern. Also endowed with great overview and much blood and with three evenly outstanding basic gaits. A stallion with rarely seen totality and a good alternative over the fine pedigree.

Incredible's pedigree does not present the tradition Sandro Hit blood often seen in Oldenburg and has a good dose of Trakehner in the lineage.

"It's a pedigree that was cultivated for a long time by Manfred Rüter from Dorsten, a long-time Oldenburg breeder," said Thoben. "It is nice that this is the case and that such horses come along for us.'

This is Helgstrand's third Oldenburg Licensing Champion in four years time. Last year he presented champion Fortunate and in 2018 he co-presented Global Player.

The reserve champion was the colt by Fürst Toto out of Royal Princess (by Royal Classic x Fürst Piccolo x Wolkenstein II), bred and presented by Arndt Schwierking.  The liver chestnut is from the damline which has produced  Sephora S (by Sir Donnerhall II - Patrick van der Meer), premium stallion Bowmore (by Bordeaux - Lisa Müller), and Grand Prix horse Andretti (Laura Bechtolsheimer). He sold at auction for 250,000 euro to Helgstrand Dressage.

The third ranked stallion was the Swedish bred Oldenburg colt by Suarez out of Tia Romina II (by Dante Weltino x Rubinstein I x Traumdeuter). He is bred Nina Sixtensson in Sweden, and sold as a foal to Maurice and René Tebbel. The dam line of this colt is the famous Rulli-Rudilore line, which produced Rubin Royal and Romanov.  He sold at auction for 530,000 euro to Klosterhof Medingen.

The other four premium stallions were unranked. A colt by Secret x Stedinger x Placido, bred by Felix Poelmann and owned by Dutch horse investor Jan Pieter Dalsem. He found a new owner in Ukraine for 304,500 euro.

A colt by Floricello x Ampere x Stedinger, bred by Rainer Lechl and owned by Detlef Ruddat. He sold at auction for 350,000 euro to Helgstrand in Denmark.

The last premium stallion was a Sezuan x De Niro x Sandro Hit, bred by Alfons Kramer and owned by the Klausing family in partnership with Gut Rethorn. He sold for 153,000 euro to Ukraine.

Seven of the 10 premium stallions were offered for sale and prices over 100,000 euro were paid each one of them.

The second most expensive, non premium licensed stallion was the Erdinger x Fidertanz, who fetched 170,000 euro.