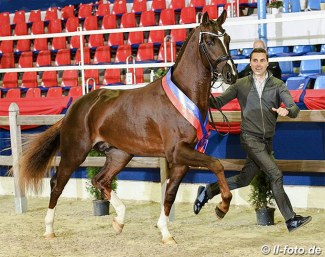 The tall and handsome Fortunate (by Foundation x Quaterback) was named champion of the 2020 Oldenburg Stallion Licensing in Vechta, Germany, on 21 November 2020.

Thirty one dressage colts were presented, 17 of them were licensed and 6 were named premium stallion.

The 2020 Oldenburg licensing took place in a lacklustre yet corona proof environment with no audience present. Small tables were set up spread out over the entire seating area where only the stallion owners were able to sit, keeping social distancing in mind. The absent crowd reduced the glamour of this annual event, but for the stallions the less electric atmosphere was better to cope with.

The annual auction following the licensing took place online and the bidding concluded on Sunday 22 November 2020. Several of the most attractive stallions were not for sale though, including the licensing champion.

The premium lot included six stallions of which four of them were of outstanding quality and two of the rather old-fashioned type.

While fortune would have favoured Florida TN (by For Dance x Zack), in the end the stallion licensing committee chose Andreas Helgstrand's Fortunate (by Foundation x Quaterback x Weltmeyer x Brentano II), who is a full brother to the Hanoverian For Magic.

Bred at Zuchthof Vogel and owned by Helgstrand, the XL-sized tall stallion moved with much power, always uphill oriented and wonderful freedom in the shoulder.

The more pocket size yet modern looking Florida TN (by For Dance x Zack x Diamond Hit) was a strong contender for the title with his very athletic way of moving, freedom in the shoulder and great beauty in his head and neck. The committee named him reserve champion.

Bred by Jörg Bös and owned by Kerstin Klieber and Stefan Sandbrink, the dark bay colt was the most "Oldenburg" of the premium lot. Dam Gwendolina is from the same line as the U.S. Grand Prix horse Doctor (Shelly Francis).

The dark bay dressage talent sold in the online auction on Sunday for 281,000 euro to Team Nijhoff and Kees van den Oetelaar in The Netherlands.

The third placed stallion was the slightly less typey chestnut stallion by Bordeaux x Furst Piccolo, bred by Arnd Schwierking. The tall chestnut did offer the complete package with a nice neck and good quality gaits.  He sold at auction for 95,000 euro and it is rumoured he will move to Grand Prix rider Lisa Müller in the south of Germany.

Three colts were ranked in fourth place in the premium ring; one of the most interesting and high quality colts at this year's licensing was amongst them.  The chestnut Venido (by Veneziano x Sir Donnerhall x Don Davidoff x Figaro) was an absolute eye-catcher. He appeared still quite youthful, which is normal and natural for his age at 2.5 years old, but had outstanding gaits with a very active and engaged hindleg. He is bred by Felix Tiemann and was presented at the licensing by Blue Hors stud in Denmark. During the licensing he sold privately to the Celle State Stud and Ingo Pape.

Another smashing colt was the Danish bred Oldenburg Veyron Hena (by Vitalis x L'Espoir x De Noir). Bred by Alexandra and Sören Buchreitz in Denmark, the strapping chestnut has a gorgeous, sporty conformation and strong, uphill gaits. He is a clear dressage prospect for the future and was certainly one of the more interesting colts in the lot. He was not for sale.

Heinrich Ramsbrock's Champagner x Wolkentanz I x Askan x Sarastro xx colt had more the looks of a show jumper - not as streamlined in the topline - but moved in a strong way and his pedigree offers new and different blood for Oldenburg breeders. The bay colt sold for 52,000 euro at auction.

The most expensive licensed colt that was not named premium was the very interesting and super moving Vivaldi x De Niro x Sandro Hit. He appeared a bit ponyesque, but was loved amongst bidders. He found a new home in Austria for 180,000 euro.

The average price for a licensed stallion was 84,786 euro.