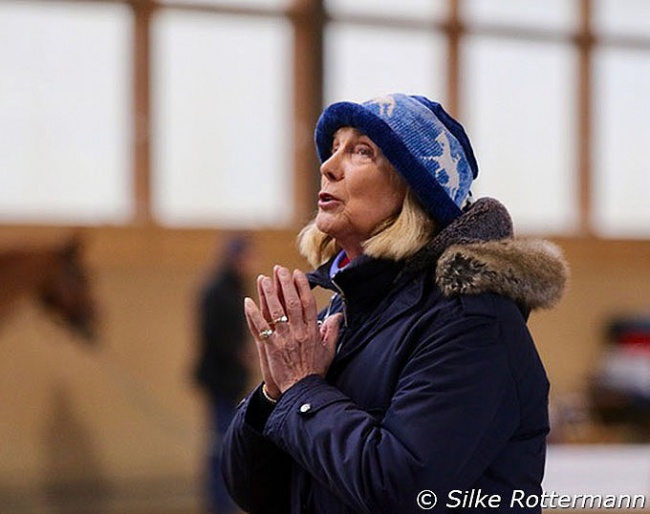 Attending a lecture of Germany’s retired I-judge and former Grand Prix competitor Angelika Frömming is always an experience in itself as the experience, the expertise, the straightness to tell things like they are, as well as the story-telling talent of the 80-year-old, seem second to none.

While other equestrian personalities her age sometimes tend to dwell in the past, Frömming is a sharp observer of the current dressage sport which she has very closely followed from the late 1950s till present day.

During her two-hour lecture on 5 November 2021 as part of the three-day-seminar called „Nature in horse training“ near Hanover, Frömming certainly did not minde her words and shared clear assessments of the current state of dressage competition.

Here are some nuggets of wisdom she shared at the seminar.

"There are two possibilities: Those who treasure the intrinsic values, who keep a horse because they love them, have a personal relationship to them and for this reason keep one. And then there is an instrumental side in which the horse is considered to earn money, to receive glory, or see it as an investment."

"When we deal with horses, these intrinsic values have to dominate, otherwise we are getting problems and society won’t acknowledge us anymore. And nowadays this is decisive. So it is top priority to consider a horse a horse and treat it after its natural needs and not mainly look at it as an investment or a sports tool. We all should heed this."

On Equipment in Dressage

"I detest this discussion about the double bridle. In principle it is there for the refinement of the rider’s aids. To ride on a blank curb had been a sign of the highest throughness and rideability for our old masters. I myself had the opportunity to ride on blank curb during clinics with Willi Schultheis and it was phenomenal. I think the double bridle gets doubted by those who never rode with it on a supple horse or who are unable to ride with it."

"Of course if you see horses not being through and their riders believe they will get thoroughness with the double bridle. This is rubbish, this is totally wrong."

"If we look back in history there was the renaissance saddle with its very high cantle in which the rider sat like in a chair. Only with De la Guérinière in the 18th century the so-called "selle anglaise" (=English saddle) was introduced with its flat seat and flat saddle flaps which allowed the rider to sit like we know it today.

If we look around in dressage competitions nowadays we can notice that the majority of saddles reminds us somehow of the renaissance style saddle. Extremely deep seat and huge knee rolls, it is dreadful. You cannot sit properly in saddles with such a design, it is an impossibility, but the riders feel safe in them because they can jam themselves in, not realising that  they block their hips completely."

"I remember that the late Holger Schmezer (German national coach until his death in 2012)  thematized this in all regional trainer seminars, to no avail. The lobby of the saddle makers is stronger and these saddles are extremely marketed.“

"The taper gauge of the ISES is a tool to objectively measure the width of the noseband. And I am convinced that it’ll be introduced internationally sooner or later, but it will come."

"To be consequent, but relaxed is the art of training a horse. Already in Renaissance time the French master Antoine de Pluvinel recognized that the horse itself needs to like equitation and this is something extremely important.“

"The Spanish walk is very fashionable today to obtain shoulder freedom from the ground. One mobilizes the shoulders with it and this is wonderful. The problem begins if you do not mobilize the hindquarters at the same time. Then you get horses who passage in front and trot behind. How to judge this?“

"Phenomena like the "one-leg-support" in trot are discordances which lead to inflammations of the suspensory ligament  because the weight of the horse’s body rests for a moment on the carrying leg.“

„Because you asked about Philippe Karl: It is true, he rejects spectacular effects, he highlights the purity of gaits and aims to make the horses more beautiful and long lasting. And this is exactly what we also want to achieve. I like if Philippe Karl speaks of "impulsion" in the sense that a horse needs to reacts immediately to the rider’s aids. It is often a problem in dressage horse tests: Enter the arena, halt, greet, trot. And it is even the case with some at Grand Prix level that the horses do not promptly trot after the halt, but first walk one or two steps. Who always showed this to perfection had been Valegro and that is the reason he always got a 9 or 10 for it. But it is a question of training. Here Philippe Karl is totally right: If I give an aid, the horse has to react promptly, otherwise it doesn’t work. They have to trot immediately.  We train our horses wrongly IF during the training at lower levels the horse sometimes gets touched with the whip two or three times. This is useless. One time and the horse has to trot.“

"To maintain the natural gaits of a young horse is the fundamental condition of training. Grand Prix horses often seem to loose the thrusting power. I am convinced the reason for it is that they are worked too much in carrying power, which means in piaffe, passage and pirouettes. The propulsion gets lost, the proportion also. You do not see this with young horses. It seems it is a negligence of the thrusting power in training at Grand Prix level. The scores are often too high for what is shown as "extension" and the training of the horse has to improve. Still, there are quite some horses who show convincing extensions at Grand Prix level, so I assume that the training of the horses lacking any overtrack is too one-sided. However, it is very important that the natural gaits are maintained. An M or S horse should also be allowed to go on the race track and move  properly forwards which is not a problem at all.

"General Holzing-Berstett who wrote the original FEI dressage rules with General Decarpentry about 100 years ago, once wrote: 'The main goal of dressage is a certain refinement of the natural gaits of the horse. Depending on their degree of collection they should become more light footed, more elevated, more diligent and more extensive. But one can exaggerate this refinement. The gaits, over all the trot, then leave an artificial, unscrewed, unnatural, inappropriate impression. Diligence becomes hastiness and abruptness, the front-leg does not step forward, but gets thrown out violently in front. It seems like we are prone to this mistake nowadays."

"Isn’t it in a way funny that these mistakes have already been mentioned in old books and are not a phenomenon of our times?"

On the Current State of Dressage

"Until the 1970s it was sufficient to ride faultless to be successful. To ride faultlessly today is not enough. The focus is on the horse’s quality of movement. And in my opinion this is a problem. Martin Plewa said in St. Georg magazine something similar. He mentioned that 'in dressage competitions regrettably there is a tendency in judging to put a bigger focus on the horse’s basic quality in comparison to the correctness of training and riding.' In my opinion Mr. Plewa is 100% right.

"The increasing shortening of the classes is another problem of our time. Shorter tests mean a more rapid sequence of movements which is simply more difficult. There are no moments anymore in which the horses can rest for a short time, where it can take a breather. The same is of course valid for the rider."

"Regarding the Grand Prix movements there is good and bad, if we compare the past 20-50 years with nowadays. The rein back and walk extensions which sometimes were a real problem over the past 20 years have improved again. The submission in the rein back is better again and it is also mostly shown in a better rhythm. In the walk extensions not all horses show overtrack, but almost all an extension of the frame. In canter the quality of the pirouettes is outstanding. The intros are extraordinary and the pirouettes mainly executed very well. Of course there is the occasional rider who rides them too small and then the horses rears up, but in principle this movement has very much improved in comparison to 20 or even 50 years ago."

"Also the rhythm in the piaffes is much better than 20 years ago. I assume it is because riders often have specialized trainers for this movement now. They train in hand from the ground and not from the horse. A problem nowadays is the high push-off the ground of the hind-legs and the lacking lowering of the haunches which is still marked well. But taking weight with the hindquarters and raising the withers is one characteristic of the piaffe movement. It is not necessary that horses push that highly off the ground behind. If they really take weight behind, they are almost not able to do this.

The use of the full scale of marks needs to be done more consequently. Judges need to have the courage to give low marks if something isn’t done well.“

"The rules themselves put the focus on the welfare of the horses and riding and judging should put more focus on applying them. This is what we have to improve. I consider it very important that a mark for harmony should be introduced and added."