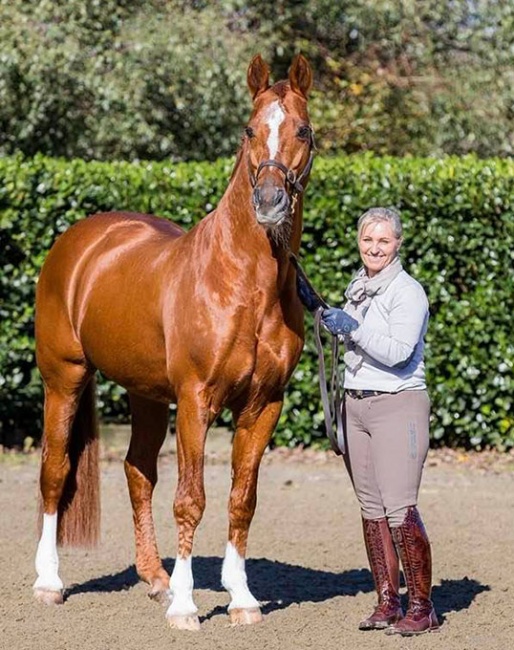 The Hanoverian licensed breeding stallion Worldly has passed away on 4 December 2021. He was 24 years old.

Worldly was by Weltmeyer out of Boleisa (by Brentano II x Ludendorff x Grunewald). He was bred by Rolf Böndel.

Worldly is the second born of Boleisa and he has six full siblings, two of them also licensed, Worldly II and Nina Menkova's Grand Prix horse Waldensee.

Worldly himself was licensed at the 1999 Hanoverian Stallion Licensing and he did his 100-day stallion performance test in Adelheidsdorf, scoring 136.92 points which placed him second of 39 participating stallions. He had the highest dressage index of 143.20 points and scored 105.23 points for jumping.

Worldly was owned by American Elizabeth Page-Lewis, who had leased the stallion to Celle.

Worldly was first competed by Celle state stud rider Wolfhard Witte in 2001. He placed third at the Bundeschampionate in Warenorf as a 4-year old.

In 2002 Witte piloted the 5-year old Worldly to another third place in the first round at the Bundeschampionate, but not in the finals (scores missing).

In 2003 the pair represented Germany at the World Young Horse Championships in Verden, where they were 7th. They followed up that achievement with another bronze medal at the 2003 Bundeschampionate a month later.

In 2004 the stallion did his first S-level test and in 2006 he did the St. Georges Special tests.

In 2007 Lewis sold Worldly to the Frenchman Xavier Marie of Haras de Hus.

That year he competed in France with Jessica Michel at small tour level, but by 2009 he was returned to Germany and began competing under Oliver Oelrich.

By the end of 2009 Ann-Christin Wienkamp was showing him and she rode him through September 2011.

In the autumn of 2011 Haras de Hus advertised Worldly for sale on Eurodressage and he sold to Renai Hart of River Park Farm in Kumeu near Auckland, New Zealand.

In New Zealand, Worldy was briefly shown by Hart at small tour level and mainly stood up for stud. In New Zealand he produced several premium fillies.

" I competed him only a few times at Prix St Georges, but rode him every day and trained with him at home and out," Renai Hart told eurodressage. "He was retired completely at 18 and enjoyed himself being the lord of the farm."

On 4 November 2021, Worldly suffered from a severe bout of colic and could not be saved.

"I was not ready for him to leave me yet, but so blessed to have had him," said a devastated Hart.

In Germany Worldly produced 15 licensed sons, of which seven got listed in Studbook I. He has 235 broodmares registered with the German federation and 40 of them are State Premium Mares.