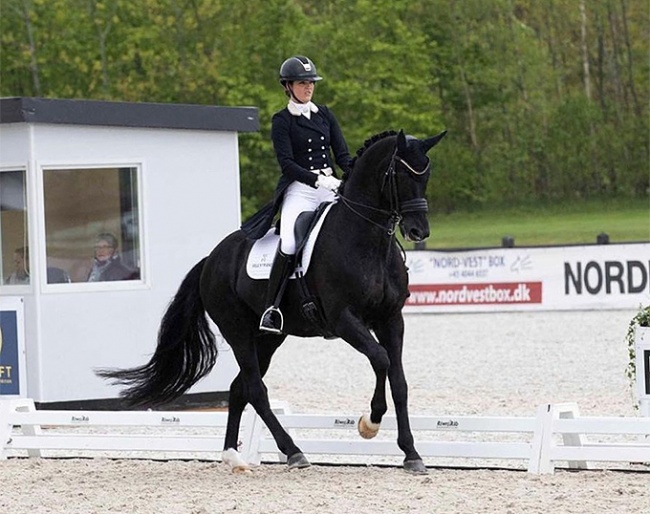 The 9-year old KWPN licensed stallion Hennessy has been sold to the Dutch Next Level Stables for Tom Verhoeven to ride.

Hennessy is by De Niro out of Silhouette (by Jazz x Ulft). He is bred by Ploegmakers-van Bavel and was owned by Steffi Verhagen in partnership with VDL stud.

Hennessy was licensed at the 2015 KWPN Stallion Licensing and became the winner of the 2015 KWPN spring stallion performance testing.

He was first trained by Vai Bruntink, but was withdrawn early from the 2016-2017 KWPN Stallion Competition circuit due to an injury.  Hennessy was then moved to Kim Koolen's stable, where he only stayed briefly.

By the end of 2017 Hennessy was put in training with Remy Bastings, who competed him on the 2017-2018 KWPN Stallion Competition Circuit and finished fifth in the finals. In 2019 Remy competed Hennessy at national ZZ-Zwaar and small tour level.

Out of the Breeders' Spotlight

While Hennessy caught the eye of the breeders as a youngster, having a 168 foals foals born in 2017,  he did move out of the spotlight as a breeding stallion as he hit FEI level.

In August 2020 Bastings and Hennessy made their international debut at the CDI-W Brno in Czech Republic, celebrating a win in the Inter I Kur, their first and only international as a pair.

Half a year later owner Steffi Verhagen, who gained popularity by starring in the tv-dating show "Farmer Seeks Wife" in 2018, moved the stallion to Helgstrand Dressage in March 2021 to be sold.

Eight months later the black stallion has been sold to Next Level Stables in Asten, The Netherlands.

Horses.nl reported that the 20-year old Tom Verhoeven will become his new rider. Verhoeven used to be an assistant rider at Kirsten Brouwer's barn before setting up his own shop in Asten.

The stable also purchased the 6-year old Danish warmblood bred Revolution Nobel (by Franklin x Solos Landwind) in Denmark. The bay is bred by NobelFood Holding and was owned by Helgstrand in partnership with Søren Grønborg. He was selected to appear at the 2018 Danish warmblood stallion licensing, but not approved.