The Essential Guide to the Canter Pirouette - Part I: Origin Steeped in Military Training 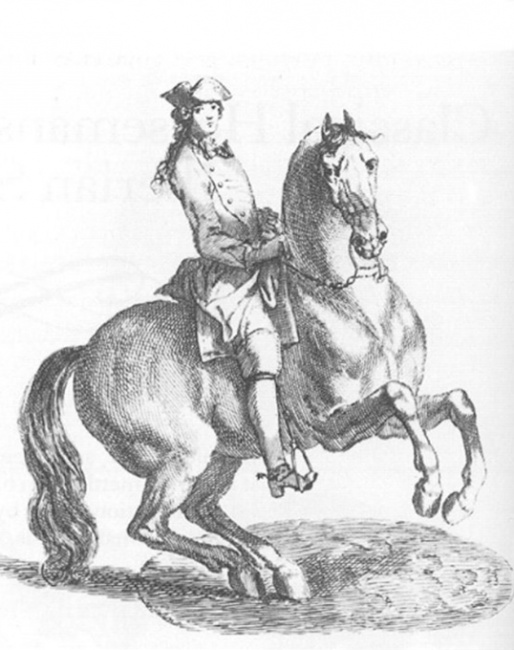 All You Needed to Know about the Canter Pirouette

For centuries the training of the horse was dominated by military aspects. Necessities of war, such as fast turns („en pirouette“) for attacks, for defence and for flight, or the „carrier“ for the fastest possible transfer of news were required. At the same time the occupation with the horse and the riding developed to a cultural asset according to the zeitgeist. With the use of horses for festivities and the increase of science the academic notion of training horses became more and more meaningful.

This is written in the annex of the "Directives for the execution of the training of horse and rider and the Spanish Riding School" of 1898: „Already in antiquity, during the time of Xenophon, equestrian art was at an idea peak and the art of school riding was already back then in close relation to the equitation for war. The same was the case during the time of competitions and jousting well beyond the Thirty Years’ War. Only when the artificialization of school riding became too strong, a strict separation between school and campaign riding happened, much for the disadvantage of both."

Holbein von Holbeinsberg (1832-1910) and Johann Meixner (1865-1917), the authors of the „Directives“ which an anonymous chief rider of the SRS noted around 1720, assume that this separation was unnecessary because High School is based on the campaign school. Only after the campaign school one is allowed to continue with the art, the High School. (Source: Unbekanntes aus der Spanischen Hofreitschule - Die Urdirectiven (um 1720) – Die Directiven“ (1898). Olms Presse 1996.)

The pirouette, initially only described as a „turn“ and later shown in half and complete form, faced multiple changes and is a special touchstone of the riding skills of competitors in dressage competition.

Searching for Clues in the Oldest Books on Equitation

To find the first descriptions or illustrations of half or complete canter pirouettes, we have to go back to the 16th century in the history of equitation.

Frederico Grisone (1507-1570) probably did not know the term "pirouette" in his manual "Ordini di Cavalcare," published 1552, but referred to the turn around the haunches. He executed it in a kind of travers canter in a few strides in a half or complete turn.

One of the first detailed publications to tight turns in canter can be found in Georg Engelhard Löhneysen’s (1552-1622) extensive book „Della Cavalleria. Grüntlicher Bericht von allem was zu der Reitterei gehoerig“ of 1609, reprinted by Olms in 1977.     In the chapter "How to train a horse for war" is written that the training of a horse is dominated by training it for war. Besides different movements, the turn around the haunches is described. Based on the "possade," the lifting of the forehand, turns on the smallest space get developed. The hindquarters are the pivotal point.

William Cavendish, Duke of Newcastle (1592-1676), describes  in his book "Nouvelle Méthode et Invention extraordinaire pour dresser les chevaux" two movements: The canter movement „terre à terre“ and the turn around a pole with hind-legs coming deeply under the center of gravity. Terre à terre is a canter movement with tiny gain in space, defined as forehand and hindquarters almost simultaneously touching ground.
Therefore a horse learnt to execute a turn in a short Terre à terre, apparently in a bit bigger circumference around a pole.

In „Urdirectives“ of the Spanish Riding School the canter pirouette is described for the first time as an independent movement. Analogously it is indicated that one should only show the pirouette completely if the horse had been made agile and cleverly on the smallest circle that it is able to throw itself around in walk, trot canter and redopp (a very collected canter in four-beat rhythm, also called travers canter). This requires that the haunches remain stationary in the center so that the horse is unable to move from the place. The forehand has to turn and throw itself around, while the hindquarters remain stationary. In this turn which had to be executed as fast as possible, the horse will automatically put its outside hind-leg over the inside and „cross“. That way the horse provides itself relief to turn without force. In a walk-pirouette the crossing of the hind-legs is not foreseen internationally. Nationally it is allowed at the end of the movement in order to return to the initial line. A crossing of the outside hind-leg in the canter pirouette does not exist nowadays. Even in the canter half-pass there is no crossing of the hind-legs.

Francois Robichon de la Guérinière (1683-1751) describes in the fourth part of his „École de Cavalerie“ of 1733 (reprint of the edition of 1817) the pirouette: „A pirouette is nothing else than a volte of a horse’s length in place. The croup remains the center and the forehand describes the circle. In this school the inside hind foot remains stationary, instead turns in place and serves as the axis of rotation around which the other three legs and the whole body of the horse are turning. Pirouettes, just like voltes and half voltes, are schools of war which serve quick turning, so that one does not get taken by surprise or to get ahead of the enemy and deviate an attack.“

Regarding the number of pirouettes one should do one after the other, de la Guérinière remarked: „One finds few horses which are able to execute several pirouettes in series and with the same beauty which is the characteristic of this movement…But does a horse own the necessary attributes, it’ll execute as many pirouettes as a wise rider will ask it.“

During the time of the introduction of the dressage World Cup in the 1980s there were discussions at the beginning, how many turns in a canter pirouette should be allowed under the point of view of animal welfare. Soon one agreed that it should be a maximum of 2 turns. During the first World Cup freestyles some riders occasionally showed a simple canter pirouette with an immediate change of lead which usually looked little harmonious and for that reason is hardly show anymore nowadays.

Also de la Guérinière’s student Johann Baron von Sind (1709-1776) wrote in his book "Vollständiger Unterricht in den Wissenschaften eines Stallmeisters," published in 1775, that the stationary inside hind-leg is the center around which the forehand moves. Regarding the number of canter strides which he calls „tempo“, the author remarks that a complete canter pirouette can be executed in one, two or four tempos, one to four canter strides. Additionally he mentions that one can show three to four canter pirouettes in series on each of the horse’s leads. He wrote, "I once had a black which executed the pirouette in such a speed that he did not take the time to put the inside front-leg on the ground, but instead hold it bent in the air (..) I even had another horse which executed the pirouette in one stride 3-4 times after another."

Von Sind describes for the first time the canter on three legs which Films perfected in his manual. Jörg Kaltenböck, very successful dressage trainer first in Essen-Stadtwald and later in Heroldsberg,  involuntarily showed this movement with one of his best horses, Roquefort, in the 1980s in some classes at Grand Prix level. When Roquefort got tense, he would not put down the inside front-leg for a stride. The different marks the judges awarded then showed if they had recognized it or not.

Between 1769 and 1771 Du Paty de Clam published three books in France and put them together in 1777 to a manual called „Theory and Practice of the higher equestrian art after nature, anatomy, mechanics, geometry and physics“. The first German edition was published 1826.

At Du Paty de Clam the canter pirouette is a high school movement consisting of four quarter pirouettes. Not the military use of the movement was important, but the artistic expression of the pirouette. He wrote: „The pirouette is a circular oscillation in canter in which the weight of the horse’s body is on the hind foot and is executed by the forehand in several parts and tempos or by strides of the forehand around the hindquarters on a circle-line. It is divided in quarter, half and whole pirouettes…The whole pirouette is a movements which usually consists of 4 quarter pirouettes or strides. The cleverness of the rider shows in his ability to keep the hindquarters stationary even during the fastest turns of the forehand.“

Manoel Carlos de Andrade (1755-1817) published his holistic reference manual „Luz da Liberal e Nobre Arte da Cavallerie“ in 1790,  published in German language in 2006 by Olms with the title „Die edle Kunst des Reitens“. In book VIII de Andrade describes the movement of the canter pirouette to the right: „The pirouette is a kind of volte which the horse executes on a circle which half circumference corresponds with the horse’s length of body. The hindquarters have to step in the centre and remain there. During the turn the horse fixates one hind-leg and executes a perfect circle with the front-legs not touching the ground while resting on this particular hind-leg.  The horse has to follow this rule evenly in the turn on both leads.“

For the successful execution of the pirouette it is important that the horse reacts promptly to the half halts and in turns. Apart from hat it should own a strong back and his hindquarters have to be strong to such a degree „that the horse is able to cleverly move the forehand or hindquarters in the one or the other direction during the turn. This means it has also to be strong in the thorax and the hocks. Otherwise it is impossible for the horse to follow the rider’s aids with the body, the hands and legs with lightness.“

The flow of information at that time was a far cry compared to our situation today. Because of that De Andrade’s annotations regarding comments of written down thoughts are astonishing: „It is my aim to help all those with my book which wish to practice the noble art of riding according to its own fundamental principles and correct procedures (...) I am aware that even unbiased and critical thinking during the lookout for truth might come to wrong conclusions.  For that reason some consider the wrong right and and the right wrong and that others do not give importance on the question of right or wrong. Narrow minded critics give everything and do not hold back to put those who write their ideas down into the wrong light. Ignorant people who are unable to widen their horizon focus themselves on twists things. And those who are lacking the capacity to reflect, have only the goal to downsize and to devalue. How should one write to avoid such insults and accusations?“

One could assume that de Andrade had anticipated the word battles of social networks of the 21st century!

In the second half of the 18th century the pirouette was illustrated as being correct in 4 phases or in one turn. Apart from that the idea arose that the hindquarters now should not be stationary anymore, but that the horse’s hind-legs could push-off.

Continue reading: Part II - Pirouettes in the cavalry manuals between 1826 and 1912

Related Links
Angelika Fromming: Half a Century of Dressage
The History of the Shoulder-In
The Essential Guide to the Piaffe - Part I: The Piaffe is a Means to an End