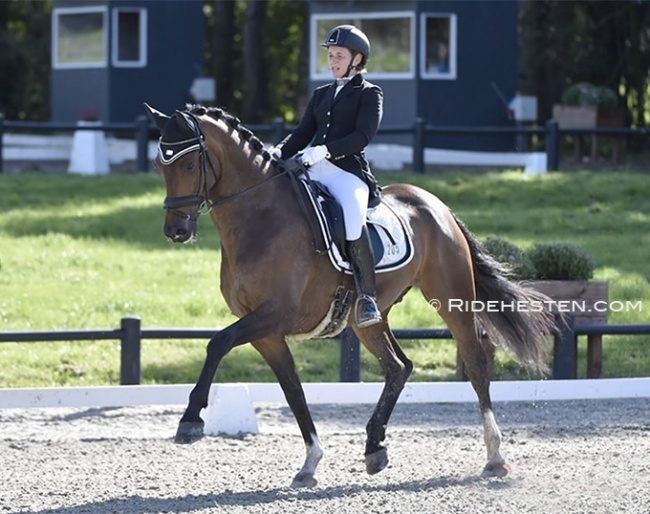 German rising junior riders Marlene Maria Binder and the Roth sisters - Antonia and Franziska - have sought training outside their regional state and are now being coached in Hessia.

Binder also found the horse that will enable her transition from ponies to junior level on horses.

Marlene Maria Binder, whose pony De Long recently moved on to new rider Laura Martin who is based at her trainer Semmieke Rothenberger's yard, has also picked up training with the German U25 rider and European Under 25 champion.

The soon to be 17-year old Binder will make the transition to junior level this year and has acquired a new horse to accomplish that goal, the 10-year old Dutch warmblood gelding Hayden B (by Santano x Jazz x Wisconsin). Bred by J. De Boer, Hayden sold as a foal at the 2012 Prinsjesdag foal auction and was then renamed Hayden KS. He was presented at the 2015 KWPN Stallion Licensing, but not accepted. Reared by Gerd Sosath, the bay ended up in Denmark owned by Helgstrand Dressage.

Hayden KS was briefly competed by Rikke Dupont in the summer of 2018. Dupont won a qualifier for the 2018 Danish Young horse Championships with him, but at the nationals in Vilhelmsborg they were a no score in the preliminary test as the horse was scared and tense. It was the horse's last show.

Binder used to be coached by Michael Bühl. She will continue to ride for the BaWu equestrian federation.

Roth passed on her pony Daily Pleasure to younger sister Franziska, while she will move into the junior division with the Oldenburg stallion Santo Dottore. Both Stuttgart based sisters work with Scholten, who drives to their base at Oberbiegelhof in Bad Rappenau in south Hessia.