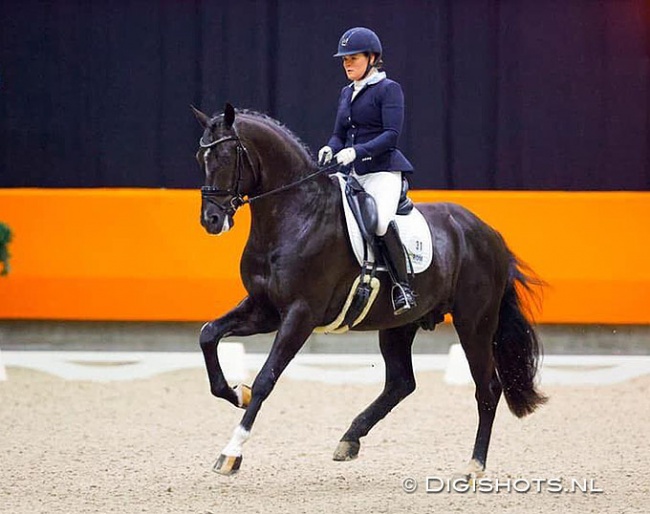 Indigro is a 9-year old Dutch warmblood stallion by Negro out of Pralina (by Jazz x Ulft). He is bred by J. Deenen.

Initially owned by Joop van Uytert in partnership with Indonesian entrepreneur Titan Wilaras, Indigro was licensed at the 2016 KWPN Stallion Licensing and went on to finish fourth in the 2016 KWPN Autumn Stallion Performance Test with 81.5 points.

In 2017 Wilaras obtained full ownership of the stallion.  In the stallion show hosted at the 2017 KWPN licensing, he was presented by Kirsten Brouwer. She also rode him to a 12th place in the 2017 Pavo Cup Finals.

In the winter that followed Danique Janssen  competed him later on on the 2017-2018 KWPN Stallion Competition circuit. In 2018, however, Wilaras was unable to present 10 offspring in the mandatory foal inspection for 2016 licensed stallion.

In 2019 the stallion sold to Rom Vermunt and Harld Bruinier in a blow-out sale which was part of a final deconstruction of Titan Wilaras' Platinum stable in Riel, The Netherlands.

The new owners allocated the ride on Indigro to Jennifer Sekreve, who showed him on the 2019-2020 KWPN Stallion Competition circuit and won the 2020 Dutch Winter Championships at Medium level in February 2020.

In October 2020 Indigro moved to Edward Gal's yard who has focused on establishing the stallion at Grand Prix level. The stallion remains owned by Vermunt and Bruinier.