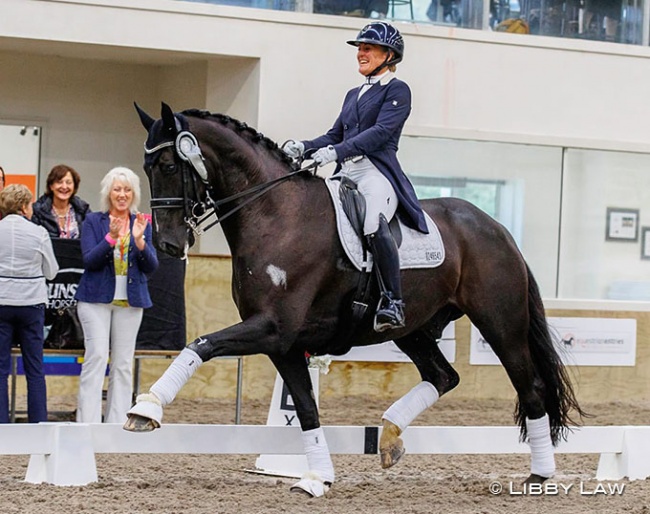 The 2022 CDI Taupo had "Dressage for Denmark" as motto as it was the first and only CDI in the country where riders were able to achieve a MER score for Herning.

Gaylene Lennard and the 11-year NZL bred Jax Johnson (by Johnson x Anamour) held onto their winning streak – just! – in the Grand Prix Special with a quality test although a few errors cost them precious marks which was reflected in the final score. They finished on 64.383%, tied with Vanessa Way and her 9-year old Hanoverian NSC Timbermill Prequel (by Prestige VDL x Dream Boy), but taking the win on a countback.

By posting a winning 69.804% in the Grand Prix the day before, Lennard now has the first of the two FEI MER qualifying scores she needs to be eligible for Denmark. With no further opportunities to obtain the second score in NZ, her next step will be deciding whether to fly across the Tasman to compete at the Sydney CDI. Way's Grand Prix score was  66.457%.

“Thanks (sponsors) DNZ and Dunstan Horsefeeds – clearly we need these events because we are all a bit rusty!” Gaylene said in her championship speech. “Thank you so much for putting this event on for us.”  Gaylene's Grand Prix horse Jax Johnson is bred by Rania Todd and David Woolley and owned by the rider.

The live stream of the Grand Prix special can be viewed here.

The Grand Prix prizegiving also saw the official retirement of Raukura Satori MH (by De Niro, bred by Matthews Hanoverians), ridden by William Millar who owns him together with Brett Carter and Rosemary Kendall.

The pair made their Grand Prix debut in 2014 after Millar had bought him as a foal from Matthews Hanoverians and trained the horse all the way up the levels. They have remained a firm crowd favourite in New Zealand, especially with their musical freestyle performances. In 2020 they were Reserve Champions at HOY and Nationals, and just last year recorded a personal best at Auckland Manukau Dressage Champs with 71% in the Grand Prix.

A night of constant rain produced another drizzly grey dawn for Taupo. This fortunately eased to showers just after daybreak accompanied by a brisk southwesterly to start drying everything out and made the outdoor warmup much more pleasant!

The 2022 CDI Taupo featured on further CDI tour, one for Young Riders.

On the opening day, Anna Wilson and the 18-year old Australian warmblood Neversfelde Rupert (by Rotspon) topped the board with 64.882%, pipping Ben Weird on the 12-year old NPE Del Rico (by Doringcourt x Falkensee) who was second with 63.882%

The Young Rider individual test victory went to the South Island after a quality performance from Meg Johnston on her 16-year old Hanoverian BL About Time (by Anamour x Witzbold). They posted 67.324 for the win with Ben Weir and NPE Del Rico back in second place with 64.294%.