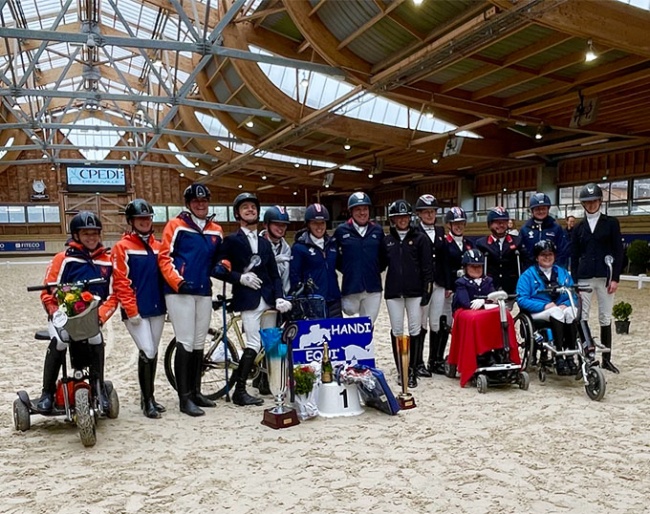 After having been cancelled two years running due to the corona pandemuc, the para-equestrian dressage community was able to finally meet up again at the CPEDI*** of Deauville.

On Sunday 3 April 2022, in the Freestyle tests taking place at the Pôle International du Cheval Longines-Deauville, the results seen in classes during the two previous days of the event were confirmed. The stars of the discipline, who are used to standing out at the biggest World events, held their ground. France can also rejoice after the success of Vladimir Vinchon.

In the stables, France’s Vladimir Vinchon and his team had just discovered the score he achieved in his Freestyle test (Grade IV) : 73.000%! Already victorious on Saturday in the Individual Test, the Frenchman, riding Fidertanz for Rosi, a 9 year old Oldenburg gelding, did it again. This success is above all synonymous with high hopes for the rider who comes from the Mayenne region of France and who is working hard towards the Paris 2024 Paralympic Games.

“It confirms yesterday's result," he said happily. “We’re consolidating our technique and the horse and I are more and more connected. But we are not going to get carried away either because the opposition was not necessarily of the very highest level. Nevertheless, this success shows that the judges are appreciating the horse more and more. We’re on are way”.

Results in the Freestyle in the other grades did not hold any big surprises. In Grade I, Latvia's Rihards Snikus, the leading rider in the CPEDI***, proved himself well ahead of his rivals during the three days of competition. In Grade II, Sir Lee Pearson, who admittedly had a few problems on the first day (4th), quickly got back on track to win both on Saturday and Sunday. In Grade III, Lotte Krijnsen from the Netherlands won all of her three classes. Just like Great Britain’s Sophie Wells, who reigned supreme in the grade V. “I’m very happy with the way the horse behaved in an arena that was difficult,” she said. “It's important to be able to show the judges the potential of the mare. And even if we weren't very lucky with the weather, it was also a great joy to return to Deauville and this event organised by fantastic people.”

The organisers were particularly happy and relieved to have been able to adapt to the weather conditions which made the use of the outdoor arena impossible. The Pôle International du Cheval Longines-Deauville gave their help and support by making the indoor arena available, thus allowing classes to be transferred indoors. “We’re indeed relieved to have been able to continue the event right up until the end, to the great satisfaction of the riders, and above all not to have put them in danger”, said Eric Estrier, Chairman of Handi Equi' Compet. “It was important to relaunch the competition because the CPEDI of Deauville is the only international event in this discipline held in France. It’s the French showcase. And it was also important for the various teams who organise the competition and our 35 volunteers who are always happy to see the para-equestrian dressage community again.”

Just like the day before in the Individual Test, the 34 year old Latvian Rihards Snikus, rode the highest scoring test of the day in the Grade I Kur to Music. Close to 80% (79.967 %), the World number 2 (n°1 in his Grade), Paralympic vice-champion last summer in Tokyo, delivered with his 14 year old gelding King of the Dance, a top level test, awarded an artistic score by some judges of 87%. It was impossible for his two rivals, Great Britain’s Gabrielle Blake (70.467 % with Strong Beau) and France’s Marie Vonderheyden (64.510 % with Bombastic d'Arion), to catch him.

God Save the Queen was heard once again in the big indoor arena thanks to Sir Lee Pearson's success in the Grade II Kur to Music. The Para-equestrian dressage rider with the most medals in history, riding his Paralympic horse Breezer, came out of the ring with a score of 74.567%. Far below his Tokyo Paralympic score (82.447%) but good enough to secure victory in front of his compatriot Georgia Wilson on Sakura (73.333%). The American Béatrice de Lavalette on Sixth Sense (73.300%) completed the podium just ahead of Céline Gerny and her faithful Rapshodie ENE-HN (73.033%).

Invincible since the beginning of the event, Dutch Lotte Krijnsen confirmed her supremacy in the Grade III Kur to Music. With Rosentolz, a 16 year old mare, she again dominated the Freestyle (76.420%). The Canadian Roberta Sheffield on Faruza (72,127) and Great Britain’s Erin Orford (LJT Diamond Crusador), 70.127%) took the other two steps on the podium.

A new victory for France’s Vladimir Vinchon and Fidertanz for Rosi in the Grade IV Kur to Music. Despite some hesitations, the French pair once again won over the judges who placed them in front of Dutch Tessa Baaijens-Van de Vrie on Happy Grace (71.940 %), and the Belgian Manon Claeys on Katharina Sollenburg (71.555 %). The Frenchman took the opportunity to improve his personnel best in the class scoring 73 % (previous best: 72.315 %).

Just like on Friday in the team test and the Individual Test on Saturday, Great Britain’s Sophie Wells, the World number 5 (n°1 in her Grade), riding Don Cara M, her 13 year-old gelding, demonstrated once again what a great dressage rider she is. Awarded 79.280%, in the Grade V Kur to Music, the British multi-medallist at all the major international events, and notably three Paralympic team titles (2012, 2016, 2020) as well as an individual title in 2016, did not give her rivals the slightest look in. For the Netherlands, Britney de Jong, on Caramba, obtained a good second place (75.260%) in front of Great Britain’s Charlotte Cundall on LJT Simply Red (72.155 %).