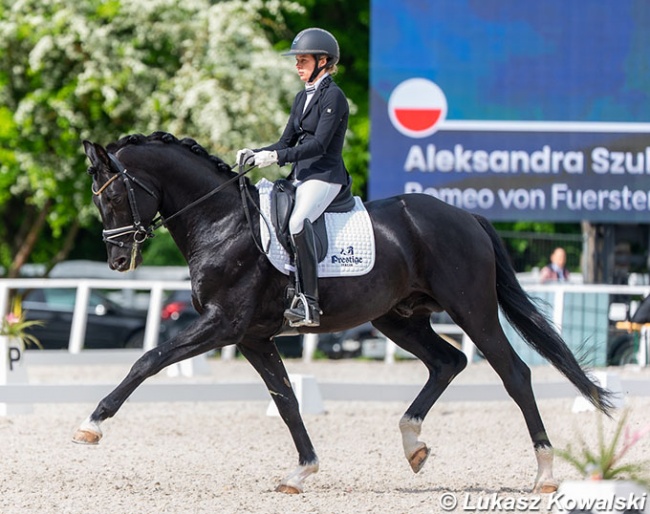 The 5-year old Romeo von Furstenball, the 6-year old Lord Leicester, and the 7-year old Konfucius became the winners of the inaugural 2022 Central European Young Horse Championship, which was held as a pilot project at the 2022 CDI 4* Pilisjaszfalu in Hungary on 12 - 15 May 2022.

Though not an official, FEI endorsed "Championship," the Young Horse competition for 5, 6 and 7-year olds has been founded as a pilot project to offer Central European riders to put their young horses in the spotlight in front of an international panel of the judges at this CDI 4* hosted at Arie Yom-Tov's Stable Unikornis north of Budapest.

The 5-year old division was the most action packed with 12 competitors in total in this CDI-YH division of which the ranking of the Finals test counted for the separate CED Championship ranking.

Polish Aleksandra Szulc had a strong start with her Polish bred stallion Romeo von Furstenball (by Furstenball x Bretton Woods). In the preliminary round the horse topped the board with 81.20 points. In the Finals he returned as the high scorer of the class with 83.80 points. The horse scored 8.2 for walk, 9 for trot, 8.3 for canter, 7.9 for submission and 8.5 for perspective.  Romeo von Furstenball is bred by Piotr Wiese and was the 2021 Polish Young Horse Champion as a 4-year old.

Polish Karolina Markowska was the runner-up aboard Andrzej Wygladala's Oldenburg mare Une Petite Fleur (by Franklin x Swarovski). After a fourth place in the preliminary test (79.6 pts), they climbed up the ladder to a second place in the finals with 83.20 points. The black mare received 8.5 for walk, 8.2 for trot, 8.0 for canter, 8.4 for submission and 8.5 for perspective.

The 6-year old division had three horses participating of which two pairs were taking part in the CED Championship. In the end only one combination made the final ranking and won the title.

Slovakian Peter Edmar and Arie Yom-Tov's KWPN stallion Lord Leicester (by Desperado x Jackson x Dageraad) won by default with a 71.200 point earning Finals test. The horse scored 7.8 for walk, 6.8 for trot, 7.3 for canter, 6.5 for submission and 7.2 for perspective. In 2021, this horse was competed by Hungarian Fanni Malaczkov.

The winner of the preliminary test was Polish Magdalena Jura on the Belgian warmblood bred Quick Star van de Guldennagel (by Special Agent Amour x Johnson) with 78.20 points, but for the finals test the horse was withdrawn due to him having moved into isolation as a precaution after he was measured with a raised temperature. The temperature dropped quickly and the horse moved out of isolation the next day.

The 7-year old division brought afoot four pairs, which all rode in the CED Championship.

Winner was home side hero Jazmin Yom Tov aboard her father's KWPN stallion Konfucius (by Charmeur x Flemmingh). They won the preliminary round with 78.00 % and in the Finals topped the board with 76.143%. The grey gelding, who was previously shown by Dirk-Jan van de Water, posted 7.5 for walk, 8.8 for trot, 8.0 for canter, 8.2 for submission and 8.5 for perspective. Jazmin Yom Tov trains in The Netherlands with Sjef Janssen.

Polish Aleksandra Krywult and the Bavarian bred Lari Fari (by Luis Figo x Don Diamond) followed in second place with 75.472%. Her chestnut stallion received 7.8 for walk, 8.1 for trot, 7.5 for canter and submission and 8.0 for perspective.