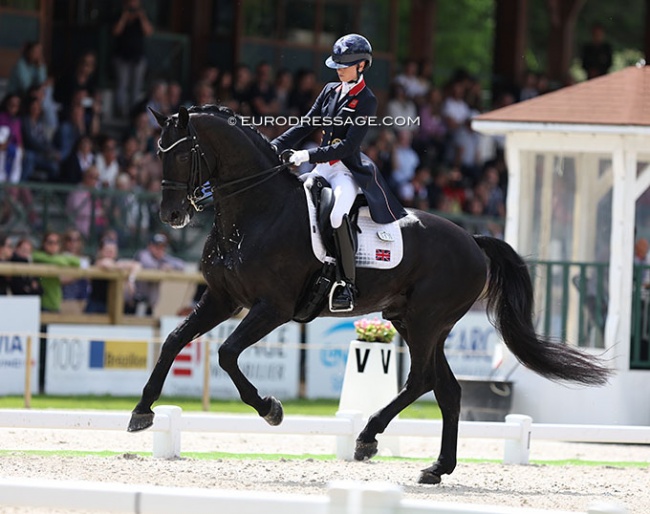 Dutch based Charlotte Fry and her young Grand Prix stallion Glamourdale have turned themselves into Britain's highest scoring Grand Prix pair by posting 79.435% and winning the 5* Grand Prix at the 2022 CDIO Compiègne in France on Saturday 21 May 2022.

After the deluge on Friday, which put somber faces on the riders and an echo of moaning and groaning across the show grounds and social media, the CDIO Compiegne returned to its usual brilliant state on Saturday with dry weather, a warm sunshine blessing the show grounds, and top level sport across the board in three arenas. Today Compiegne was back to usual business with amazing sport and a large crowd of in-people as well as passers-by enjoying the wonderful French lifestyle of champagne, cheese and wine in the trade fair while watching dressage on a show ground buzzing with excitement.

Charlotte Fry, a member of the British team at the 2019 and 2021 European Championships and 2021 Olympic Games, catapulted herself today into the number one spot as the highest scoring British rider of the moment. She won the 5* CDIO Grand Prix as part of the FEI Nations' Cup on the 11-year old KWPN stallion Glamourdale (by Lord Leatherdale x Negro).

With Britain's team horses En Vogue and Mount St. John Freestyle both injured and Briolinca just having made her come back after a 2-year break a day earlier, Fry proved that her 2018 World Young Horse Champion Glamourdale has come of age this year and is ready for the big time. The black stallion began his test with very strong trot extensions and half passes, but his piaffe work was not the best he has shown so far. He was tense, on the forehand and back-stepping. Also the extended walk did not have the greatest overtrack, but then the canter came and this is where this horse makes all the difference. The canter extensions are good for an 11, the two tempi's were massive, but in the ones he even held himself back a little and the right pirouette had loss of stride and rhythm. The zig zag was phenomenal though and the final centerline had a very good rhythm.

Judges Mariette Sanders-Van Gansewinkel, Elke Ebert, Susanne Baarup, Raphael Saleh, and Peter Storr were thrilled and rewarded Gert-Jan van Olst's stallion with a 79.435% for the victory. The individual marks ranged from 78.261% (Baarup) to 81.087 (Saleh). Fry now has four Grand Prix horses for the choosing towards team selection for the World Championships in Herning: Glamourdale, Everdale, Dark Legend and Inclusive.

Isabell Werth has closed a chapter in the winter of 2022 as now both her prime rides, Bella Rose and Weihegold, are retired from competition sport. A new chapter has began in which the baton has been passed onto Victoria Max-Theurer's 12-year old DSP stallion Quantaz (by Quaterback x Hohenstein), while 16-year old Emilio (by Ehrenpreis x Cacir AA) hasn't been out since June 2021 and 10-year old Superb (by Surprice x Donautanz) is just in her first year at international GP level.

Isabell Werth made her international debut at Compiegne, even though the competition celebrates its 11th anniversary this year; While in the past Helen Langehanenberg has made this French event her show of choice, German riders have notoriously neglected entering this show. As the most decorated rider on the planet, Werth was greeted with much applause upon entering the main stadium and one could hear a pin drop during her test. The silence was deafening.

Werth presented a Quantaz who showed even more maturity in his work compared to his last CDI in Hagen, but today there were bridle contact issues and at several occasions the horse stuck its tongue out (in the trot extensions and tempi changes). The extensions were ground covering with the nose out and there was much crossing of the legs in the half passes. The extended walk could have had more overtrack, but the rhythm was good. In the second piaffe the horse hollowed the back and in general the piaffes could have more elevation in the forehand. The two tempi changes were straight, the pirouettes small but lacked climbing in front. The final centerline was straight and very rhythmical. They scored 76.870% for a second place. The tongue probably threw the experienced panel off guard as the marks ranged from 74.783% (Baarup, Storr) to 79.130% (Ebert).

The Nations' Cup ranking in Compiegne took quite a beating when no less than two pairs of the teams of three retired or got eliminated. Fiona Bigwood's Hawtins Delicato (by Diamond Hit x Regazzoni) was resistant to the bridle and threw his head up or curled himself regularly, which made Bigwood excuse herself from the test at the end. Adelinde Cornelissen's Fleau de Baian (by Jazz x Ulft) got eliminated at the tack check for blood after a 72% earning ride. The liver chestnut ground his teeth throughout the test.

This put Sweden into the provisional lead of the Nations' Cup in Compiegne with 10 points so far after the first round. Tomorrow the Special and Kur to Music will generate more points towards the final ranking. This year the latest change to the ever-changing Nations' Cup system is that in Compiegne there are teams of three riders competing (instead of four). The Nations' Cup system keeps changing year after year that even this reporter is starting to loose track of how it works. Mixed levels (like in Wellington), purely Grand Prix level (in Europe), riding three tests mandatorily (like in Aachen), making a choice for the Special or Freestyle (everywhere else). Enough already! It's a joke.

Best Swede in Compiegne is routinier Patrik Kittel, who brought three horses to France and has been on winning form with Forever Young and Blue Hors Zepter. As his former number one Well Done de la Roche CMF has not yet made her return to competition due to an injury, the 10-year old Swedish warmblood bred Touchdown (by Quaterback x Sack) seems now his new number one in the barn. The bay gelding posted 76.043% for a third place. The bay gelding breathes very heavily which generates a very laboured impression for the Grand Prix work. The trot extension and half passes were ground covering, the extended walk had one hoof overtrack and a nice clarity of rhythm. The horse regularly tilted to the left and the second passage could have flown more, but the piaffes were on the spot, even though he gets wide behind. Touchdown had all five judges on the same wavelength with 75 - 76% earning scores.

Kittel's student Juliette Ramel has truly found her groove on her 16-year old  KWPN gelding Buriel KH (by Osmium x Krack C), who seems to be like red wine, getting better with age. The dark bay gelding has exceptional canter work that continues to score high marks with fabulous pirouettes and tempi changes. Ramel is able to ride him with a more relaxed composure. The second piaffe-passage was superb, although in the first piaffe Buriel dropped in the poll. She posted a well earned 75.391% with marks between 72.717% and 76.848%.

Wagner on the Rise

The pair was trained by Klaus Balkenhol and Ton de Ridder before they moved to Norbert van Laak last year. They have showed significant progress in the general frame and consistency of performance. The chestnut has a lovely passage and trot extensions, although he can get a tad bit uneven in stride length in front. The walk is still very limited and Quater Back Junior's problem point was always the small piaffe but today the horse showed flashes of his potential with a lot of spring and lift, although he could not sustain it fully. But it's all there.