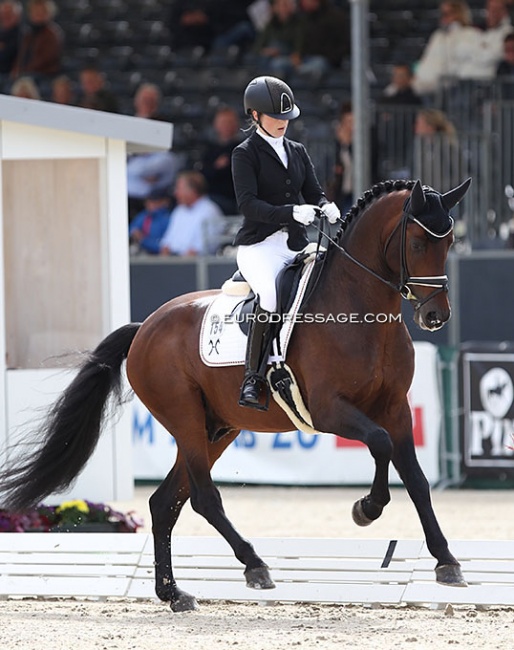 Bred by Simone and Thomas Visser, the bay stallion was licensed at the 2018 Hanoverian stallion licensing in Verden.  At the licensing he sold at auction for 70,000 euro to Frank Becker.

At the 14-day stallion suitability test held in Adelheidsdorf, Germany,in September 2019, Rod Laver was the best scoring dressage stallion with 8.40 points. He got 9.29 for dressage and 7.08 for show jumping.

The stallion began his sport career under Anna-Lena Seijben as a 3-year old in 2019 but in the summer of that year Lena Stegemann took over the ride. The new pair won bronze at the 2019 Hanoverian young horse championships in Verden and were selected for the 2019 Bundeschampionate where they were seventh.

In June 2020 Birte Senftleben competed the horse briefly before Stegemann was back on board. At the 2020 Bundeschampionate they were fifth.

In 2021 Stegemann piloted Rod Laver to a tenth place at the World Young Horse Championships in Verden and to bronze at the 2021 Bundeschampionate.

For 2022 Becker made a few changes in the management of Rod Laver. The ride was allocated to French Kim Brüning, who made her national show debut on him on 20 May 2022 at the show in Munster-Alvern.

A week later the owner's ex-wife, Esther Maruhn, rode him in an M-level test in Scharnebeck, while on 10 June Brüning was back in the saddle at the regional show in Uetzingen.

When asked if Kim will try to qualify Rod Laver for the 2022 World Young Horse Championships in Ermelo, either for France or Germany, she told Eurodressage, " I‘m employed by the Becker family and received the ride on Rod Laver. We will see what Family Becker plans for the season."

The 25-year old Brüning made her international show debut as a young rider in 2017 on Feivel's World (by Filmstar x De Niro). She competed him through 2018, riding for Germany. In 2021 she declared for France and returned to the ring with this horse in the Under 25 division at the CDI Meerle. The pair represented France at the European Under 25 Championships in Hagen, where they were 21st in the short Grand Prix.