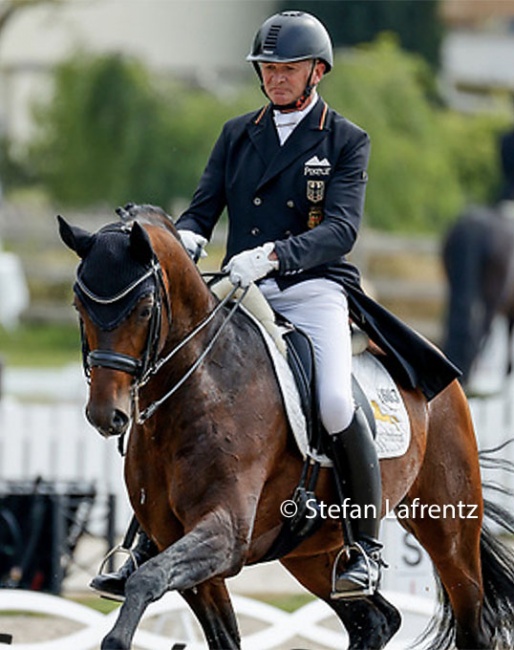 German junior rider Maleen Kohnle has received the ride on the the Hanoverian licensed stallion D'Alessandro.

D'Alessandro is an 8-year old by Don Frederic out of Sydney (by Stedinger x Del Piero x Madison). He is bred by Ludwig Fischer at Gestut Greim.

D'Alessandro got licensed at the 2017 South German Stallion Licensing in Munich.

He did his sport test in April 2018 in Munster-Handorf, scoring 7.75 for dressage as the high scoring stallion of the group. A month later he did the 14-day suitability test in Neustadt, where he earned 8.53 for dressage and 6.78 for show jumping to get a total of 7.98 points.

D'Alessandro is owned by Ömer Boyar van Baaren's Cologne based company Equus Invest, in which the Schurner couple of Gut Neuenhof have a stake.

The bay stallion was first competed in Germany as a 5-year old in 2019 under Hubertus Schmidt's assistant trainer at the time, Ivan Nieto Sanchez. The pair rode in a few L and M-level tests through 2020, but did not do the Bundeschampionate.

In 2021 Hubertus Schmidt rode the stallion in the Developing Prix St Georges horse classes (Nurnberger Burgpokal) but although the pair produced excellent results they narrowly missed out on the finals.

D'Alessandro has sold to German junior rider Maleen Kohnle, who transferred from ponies to junior level this year.

"We bought D’alessandro about a month ago," Maleen confirmed to Eurodressage, adding that she is still getting acquainted with the horse and has no immediate show plans. "We are not sure what the official show debut will be," she said on Monday 20 June 2022.

Two days before, on 17 and 18 June 2022, Kohnle competed D'Alessandro in the junior division at the 2022 Rhineland Regional Championships in Langenfeld, where they scored 65.090% in the first round and 65.833% in the second round.

Kohnle and her pony Dabia Dior made their international debut in 2021 at the CDI Opglabbeek in Belgium. At the end of they year they were the silver medalists at the 2021 German Pony Championships.