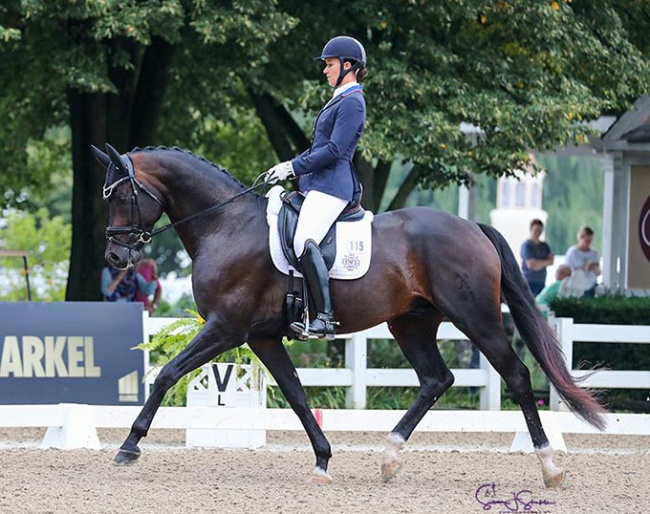 The young and developing horse classes at the 2022 U.S. Dressage Championships  began on Thursday and Friday 25-26 August 2022. The first round serves as a warm-up round to get the horses acquainted with the competition arena and the judges, while the finals test will be decisive for the medals.

Adrienne Lyle and Fürst Dream had an excellent test to win the class with a score of 9.5. Lyle (Wellington, Fla.) and Betsy Juliano, LLC’s 2018 Hanoverian stallion earned 9.5 for the trot, 8.5 for the walk, 9.6 for the canter, and 10 for both submissiveness and general impression. It has been a special summer for Lyle and owner Betsy Juliano, who owns this promising stallion and also owns Lyle’s mount, Salvino, at the 2022 World Championships.

“I was incredibly proud of him today,” said Lyle. “This is a big venue, and there's a lot going on for a four-year-old. We've done very limited showing. He handled everything just super well, he was focused, and he was right there with me. He's just got such an incredible brain, which is something I really like, besides his talent. And he's got lovely gaits, but he's really got a super brain, especially for a stallion.”

Fürst Dream was sourced in Germany two years ago. "We got him about a year and a half ago. We found him in the two-year-old stallion auctions in Germany, bought him out of that, and then lightly competed him," said Lyle. "I've always ridden young horses, it's what I love to do. I've always brought them along and tried to produce my own horse, I just haven't done the actual young horse competitions much before. This has been really fun to learn more about them, and they've grown so much here in the U.S. The quality of these horses here now has really improved and, it's really exciting to see.”

Fourteen combinations kicked off the 5-year old championship with the preliminary test.

Adrienne Lyle put in another excellent ride to win the class with Valor on a score of 9.26. Lyle (Wellington, Fla.) and Kylee Lourie’s 2017 Westphalian gelding (by Vitalis x Furstenball) earned scores of 8.5 for the trot and walk, 10 for the canter, 9.5 for submission, and 9.8 for general impression.

“He was really, really phenomenal today,” said Lyle. “Honestly, I don’t think I could’ve asked him to do much better than what he did. He is so fun in the ring. He is so light to the aids, soft in the contact that you can just kind of sit there and try to stay out of his way. And he really lets you navigate him through all of the different questions in there.”

Rebecca Rigdon (Cardiff by the Sea, Calif.) and MSJ For Vips, Lauren Fischer’s 2017 Oldenburg gelding (by Foundation x Vivaldi), finished third with a score of 8.68.

Cesar Parra and Møllegårdens Fashion, his and Marcella Parra’s 2016 Danish Warmblood gelding by Florenz x L'Espoir, impressed the judges to win the FEI Six-Year-Old Preliminary Test. After finishing third in last year’s five-year-old championship, Møllegårdens Fashion demonstrated his development in the past year with Parra (Whitehouse Station, N.J.) in the irons to earn a score of 8.42.

“He is very strong, but I think he is a horse who is built for Grand Prix,” said Parra of “Fashi.” “He has amazing hind legs. He is very good in the contact, he is very honest, and he is very powerful.”

Rebecca Rigdon (Cardiff by the Sea, Calif.) and Lionell VE, Lauren Fisher’s 2016 KWPN gelding by Negro x Tenerife, were second with a score of 8.24.

Alice Tarjan (Oldwick, N.J.) and Gjenganger, her 2016 Danish Warmblood mare by Grand Galaxy Win x Don Schufro, were third with a score of 7.94.

“It was really good. I gave more gas in that ring than in the warmup, just saving it a little bit and then I really wanted to go for it and show everybody how great a mover he is,” said Ots. “He is such an honest, really with you horse. Being a stallion, he is a puppy dog. You can have a five-year-old lead him, but then he fights for you in the ring in a really nice way.”

Ots praised the owner for supporting him along the way, "I have had him for a year. The owner is Heidi Humphries of Zen Elite Equestrian, which I ride for. She had purchased him as a five, coming six-year-old, and she is such a wonderful owner because she wanted me to do the six-year-old [division] last year. I really wanted to, but I said, ‘You know, it is just not really ready yet. If you could just trust me and just give it a little bit of time. I really think seven-year-olds will be a good plan for him.’ She has been a dream. Honestly, everything that I have asked her to do for the horse, she has done.”

Amanda Perkowski (Wellington, Fla.) and Sonata MF, Next Level Performance Center Inc.’s 2015 Hanoverian mare by Sir Donnerhall x Don Principe, were second with a score of 7.58. The mare is a full sister to Serenade MF, who is leading the U.S. Grand Prix Championships at the same venue this week.

Report on the first round here.

Nine combinations competed in the first of two tests in the Developing Grand Prix Horse Championship.

Alice Tarjan and Jane won the Intermediate II Test in a talented class. Tarjan (Oldwick, N.J.) and her 2014 KWPN mare (by Desperado x Metall) had a solid performance to earn a score of 71.813%.

“I’m really happy with the horse,” said Tarjan. “We’ve got the twos and the ones. It probably wasn’t very good, but we got what counts, which was kind of a miracle given what the warmups have been. She’s really green. She’s 8.”

“It’s interesting, they say some horses are good horses for the young horse program and some horses aren’t," said Alice about Jane, whom she bought as a 3-year old. "This is a good example of a horse who I didn’t think that was the best route for her, so she really hasn’t shown hardly at all until this year. She’s 8 doing I-2. It’s the first away show she’s ever been to. I showed her a little bit down in Florida, she did the futures stars challenge, and the goal is to do the developing grand prix this year, so the horse just really needs ring exposure and experience.”