Dr. Inga Wolframm: "What is a Piece of Tack?" 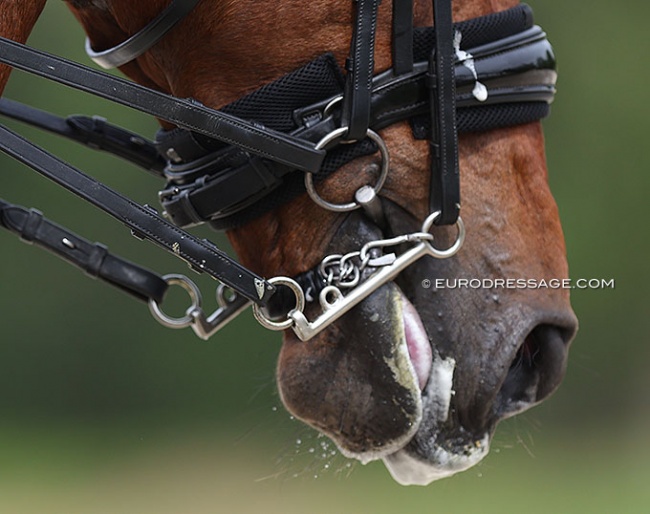 Dr. Inga Wolframm is Professor of Sustainable Equestrianism at the University of Applied Sciences Van Hall Larenstein in the Netherlands. She holds a PhD in rider psychology and an MSc in human and equine sports science. She’s passionate about equestrian sport, and even more passionate about making it future-proof, by demonstrating how humans and horses can interact sustainably with each other and the environment. Her research focusses on using evidence-based theory to explain real-life problems and develop practical solutions for equestrians everywhere.

Dr. Wolframm broke the glass ceiling at the 2010 Global Dressage Forum when she presented scientific evidence for the natural bias that has infiltrated into the dressage judging system. Her research gave stimulus to valuable changes being made into the dressage judging sport, including the half point system, seven judges instead of five, the dropping of the collectives marks, etc.

Wolframm is now ringing into the debate which was sparked by an IDRC/IDTC joint letter, posted on 17 September 2022, about a number of recommendations the Equine Ethics and Wellbeing Commission made to the FEI in August, including making the double bridle and spurs optional for Grand Prix riders.

On 30 September Horse & Hound published the article titled ‘Controversial’ proposal around double bridles and spurs sparks debate,' which brought the whole discussion out in the open. David Hunt, president of the IDTC, responded with a letter to the editor in which he named the double bridle a "sport issue" and not a "welfare issue."

I’ve been asking myself that question ever since reading about the proposal by the FEI’s independent Equine Ethics and Welfare Commission to make double bridles and spurs optional at Grand Prix level in international dressage and the ensuing debate.

Ideally, a piece of tack is a tool. Nothing more, nothing less. A tool to assist us in communicating more clearly and effectively with our horses to make sure our interaction becomes safer and more enjoyable for everyone involved. But as is the case with any tool, even those that may appear innocuous, it takes a certain level of experience and expertise to use them safely and effectively.

Think of a microphone. A highly useful piece of equipment, especially when trying to get yourself heard in a spacious room full of people. Also, you’d be hard pushed to find anything dangerous about it. Or would you? Ever been at a conference or seminar where the very first sound that comes out of the microphone is so loud and so high-pitched it almost pulverized your eardrums? And even though that horrible sound might not be life-threatening, it’s still highly unpleasant. Which is why most experienced speakers will treat any microphone with the appropriate caution when first switching it on…

The point I am trying to make here is the same one riders and trainers have made many times over: it’s not the tool that’s the issue, but the person using it. Which is why, in equestrian sports as much as in life, you should only use a tool, or a certain piece of tack, once you’re experienced enough to use it correctly and safely.

A piece of equipment can move beyond being merely a tool; it may also become a symbol denoting traditions, affiliations, and, of course, levels of experience or skill. Think of martial arts, for example, where the colour of the belt denotes a student’s progress across the levels. It’s a system that is highly motivational due to its inherent simplicity. Rather than having to painstakingly observe martial artists’ every move when trying to decide on their level of expertise, one look at the piece of cloth around their waist is sufficient. These particular types of ‘cognitive short-cuts’ even have a name: they’re called ‘one-reason decision making’ or ‘fast and frugal heuristics’. The ‘fast and frugal’ in the name refers to the fact that a cognitive judgement of this type relies on one salient ‘cue’ (in this case, the colour of the belt) rather than lots of different cues relating to the level of skill of the martial artist. It therefore requires less time (so it’s ‘fast’) and less information (thereby being ‘frugal’).

To us as human beings, using short-cuts (heuristics) when making decisions is extremely appealing. Our brains are simply not very good at processing lots of information in a short period of time. Whenever we do try to do so, it costs a lot of energy. (And just to drive this particular point home: even though the brain only takes up 2% of the body’s mass, it uses 20% of the body’s total energy.) So, to save energy, we’d much rather latch on to one simple cue (the colour of a belt or otherwise) and be done with it. Obviously, using only one single cue (the colour of the belt) to form a judgement on expertise only works when that particular cue has previously been associated with performance. That’s why this particular short-cut is also called “recognition heuristic”.

By now, you probably know where I’m going with this, but bear with me just for the sake of the argument. In equestrian sports, spurs and double-bridles have become inexorably linked to higher levels of performance, as, formally, their use is restricted to riders who have attained sufficient levels of expertise. As a result, spurs and double-bridles have attained the (unofficial) status of performance symbols.

For many riders, being able to strap on a pair of spurs for the first time, or trying out a double bridle has become a rite of passage. Not because they’ve necessarily turned into better riders, but simply because those pieces of tack are essentially a ‘recognition heuristic’. What is more, such a cognitive short-cut is a much easier way of deciding that you may call yourself a ‘good’ rider than trying to assess your performance on the basis of all those different cues and signals that make up the horse-rider interaction. It goes without saying that there is an inherent danger here. If you’re not actually ready to ride with spurs and/or double bridle, the horse will be the one having to suffer the consequences.

What to do about it? Well, using cognitive short-cuts is human nature and inexorably tied to our brains’ inability to process lots of information. So nothing much we can do about that.

What we can do, though, is to make sure that spurs and double bridles no longer carry the status of performance symbols. To my mind, giving elite riders at international level a choice of whether to use spurs and double-bridles would be an important step towards demoting these pieces of tack to what they are: tools that, if used with the sufficient experience and expertise, can improve and enhance levels of communication between riders and their horses.

Eurodressage strongly recommends re-reading our 2014 article: The Double Bridle: An Instrument of Understanding

Related Links
Joint Letter from IDRC/IDTC Sparks Controversy and Debate on Social Licence
David Hunt: The Double Bridle as a Sport Issue, not a Welfare Issue