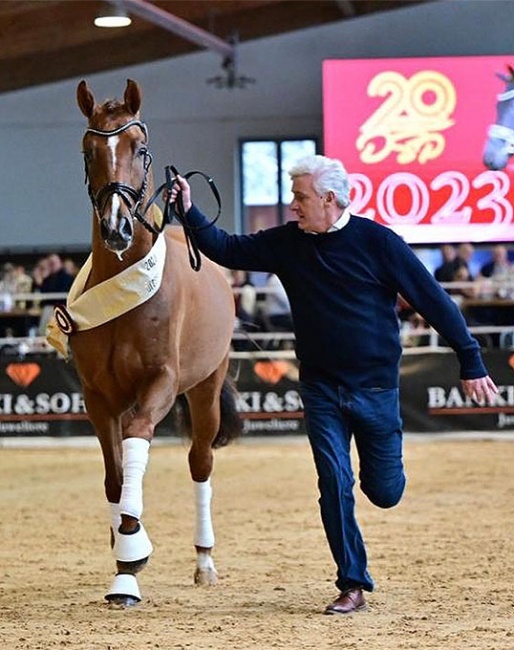 A collection of 45 colts was selected for licensing; 43 showed up and 21 were licensed. Seven were named premium

The champion was a chestnut Viva Gold x Don Diamond x Don Frederico x Wolkenstein II offspring, bred by Herbert and Ursula Linz and owned by Gestut Birkhof in partnership with Horst Eulich. The owners' duo acquired him as a foal named Veni Vidi Vici at the Riedlingen Foal Auction in 2020 for 32,000 euro.

This is the third licensing champion Gestut Birkhof has reared in the past two decades. After Denario and Don Diamond, this Viva Gold is their third. He will stand at stud at his owner's place.

The reserve champion was also by Viva Gold, but out of a Rock Forever x Florestan x Entree dam bred by Simon Bürgers in Mönchengladbach.

The Hanoverian branded stallion was the favourite of the public and became the price highlight of the auction and sold for 420,000 euro to Helgstrand Dressage. Initially it was announced that Tobias Schult would stand him up for stud but on Saturday evening Helgstrand came forward as the buyer and they will manage the stud duties themselves.

Three Viva Golds were presented for licensing in Munich: all three passed and two were premium. Just like in Oldenburg and Hanover, the Viva Gold offspring made its mark this year at the licensing.

The seven premium stallions were: