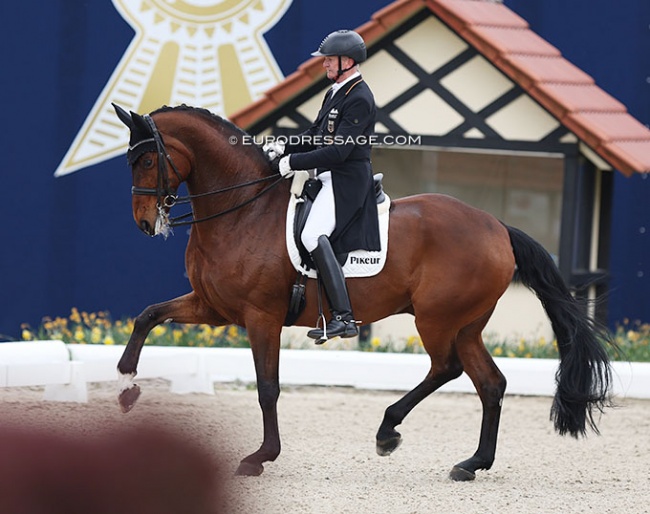 Hubertus Schmidt's Grand Prix horse Beryll has been sold to Mexico as a Pan American and potential Olympic Games' hopeful. The ride has been allocated to Raul Marti.

Beryll is a 13-year old Hanoverian gelding by Benetton Dream out of Wie Lanthana (by Wie Weltmeyer x Lanthan x Akzent I). He is bred at Hof Kleemeyer.

The bay was first competed in Germany as a 3-year old in 2013 under Sissy-Nadine Selle before he sold to the U.S.A.

In America, the horse had a different name: Bojing.

In 2015 the pair made it to the U.S. Dressage Finals at Training Level.  Collins consistently competed the gelding up the levels and in 2017 they began showing at regional small tour level.

Discovered at a Clinic

Hubertus Schmidt discovered Bojing at a Frank Henning Old Masters clinic at Avalon Farms on 8 September 2018, where he was the keynote speaker and in which Collins rode the horse.

Schmidt bought him and brought him to Germany. He returned to his original German named "Beryll"

Hubertus made his show debut on Beryll in the Louisdor cup qualifier held at the CDN Hagen in June 2020, posting 72.093% in the short Grand Prix. They also showed at Hof Bettenrode and in Verden and Balve. They qualified for the 2020 Louisdor Cup finals in Kronberg and finished 10th in them.

Their partnership went international for the first time in Mannheim in April 2021, followed by starts in Munich, Kronberg, Herzlake and Aachen. In 2022 they rode in Hagen, Munich, Wiesbaden and Kronberg. At the latter show, Schmidt had to withdraw Beryll from the freestyle due to personal health problems, which led to Schmidt's retirement as a rider from competition sport.

In the autumn of 2022 Schmidt sold Beryll to Mexico, as first reported by St.Georg.

Eurodressage talked to Beryll's new rider, Raul Marti Perez, who revealed that the gelding has been acquired for a "Games" hopeful.

"His owners are Group Trusot Sport," Marti told Eurodressage. "We expect to compete him at Grand Prix level in 2023. Getting to a few games would be a dream come true."

A year and a half ago he moved to Mexico to ride there for Grupo Trusot in Zapopan near Guadalajara. In 2021 Raul won the Mexican small tour championship. At the 2022 Mexican Championships he won the 5-year old division on TS Bizcaya.