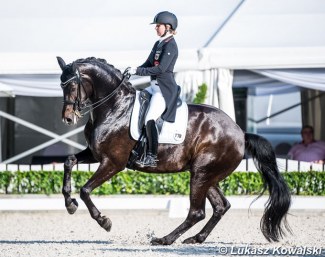 German young rider team combination Jana Schrödter and Frau Holle are no longer a combination. The mare has returned home to reunite with her owner, the Merkt family.

Frau Holle is a 9-year old Westfalian mare by Furstenball out of Rotkäppchen (by Riccio x Mon Cheri). She is bred by Christopher Rawert.

The mare made her show debut as a 4-year old under Katrin Burger, who at the time was the header trainer and rider for the Merkt family.

In 2017 Mirja Block took on the ride after Burger left their barn.

In 2018 Frau Holle moved to the Schrödter stable, where first Sabina Schrödter trained the mare up to small tour level. She competed her from the summer of 2018 through 2019.

In 2020 young rider daughter Jana Schrödter took over the ride. Jana had won the 2019 European Junior Riders Championships on Der Erbe and moved to the young riders category in 2020 with two horses, Der Erbe and Frau Holle.

In between the two corona lockdowns, Schrödter made her show debut on Frau Holle directly at the CDI Mariakalnok in Hungary, where she won two classes with 73.790% and 75;353%.

The pair went to the German team selection trials in Warendorf as hot favorites for a team spot and secured one after placing second twice. They were nominated to the German team for the 2020 European Young Riders Championships in Budapest.

Prior to departure to Budapest, Frau Holle was dropped from the German team as the mare had tested positive to medication. She was not allowed to replace Frau Holle with Der Erbe and a troubled German YR team ended travelling to Hungary with just three riders.

Schrödter competed Frau Holle in the Nurnberger Burgpokal qualifier of Donaueschingen, which she won.

At the 2020 German Young Riders Championships in September she came back with a vengeance and won the silver medal, sandwiched by two team riders who earned medals in Budapest.

The Nationals in Riesenbeck were the pair's last competition together.

Frau Holle has now returned home to her owner in Steinenbronn, Germany, and will continue under Lena Merkt.

The 17-year old Lena Merkt is yet to make her international show debut.

Lena's elder brother Philipp Merkt competed internationally on ponies but seems to have given up on competitive riding. He competed De Long in the pony classes and Felice (by Furst Piccolo x Ehrentanz) in at national junior riders level. His last national show dates back to August 2018.