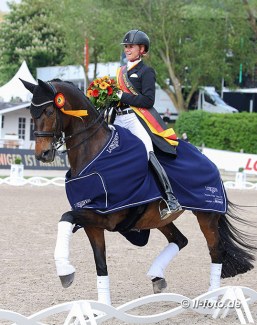 Jessica von Bredow-Werndl has renewed her title of German Grand Prix champion at the 2021 German Dressage Championships in Balve, Germany, on Friday 4 June 2021.

The competition, which counts as the first of two German Olympic team selection trials, kicked off yesterday with a warm-up Grand Prix class won by Von Bredow-Werndl on Beatrice Burchler-Keller's 14-year old Trakehner mare TSF Dalera BB (by Easy Game x Handryk). Judges traditionally inflate their scores at national championships - whether this is a nationalistic boost or lobbying for future championships is unclear - but this is a remarkable trend all across the world. That being said, Balve did deliver some top class riding from the German A and B-squad riders. In the warm-up Grand Prix, Dalera already scored a whopping 85.040%, a full four percent ahead of Isabell Werth and her number one, Bella Rose (81.320%).

The first set of medals was decided in the Grand Prix Special in which von Bredow-Werndl continued to reign supreme. Despite two small bobbles the 35-year old Aubenhausen based rider scored the highest mark of the day, 84.882%, and got the gold.

"I made it a thriller today, just as planned. Aside of the two hiccups, it felt as good and powerful as yesterday," said the brand new German champion. "Dalera was simply indescribable. I don't think about what this year can still bring. I just want to ride well. Today we see that there still are a few rough patches, which I want to smooth out."

Isabell Werth and Madeleine Winter-Schulze's 17-year old Westfalian mare Bella Rose (by Belissimo M x Cacir AA) scored the silver medal with an 83.902% earning test. In order to win her 17th German Champion's title, Isabell Werth risked it all. Towards the end of the test there was a mistake in the flying change, which made the score drop. Werth was back in the silver medal position, like in 2020.

"I was focused and thought that it was in the bag, but it wasn't," Werth joked after the prize giving ceremony. "It's like with show jumping. The last jump is also part of the course." Werth was pleased with the progress her horse had made over two days. "It was a big step forwards compared to yesterday," she said. "You could see that the whole horse was more present again. Passage and piaffe were very good, the trot also very good and the connection much more stable than yesterday. Now she still needs a bit of power and then in one or two tests I hope she'll be back to her old form."

Werth also placed third in the Grand Prix Special on her second horse, the stallion Quantaz (by Quaterback x Hohenstein) in which sponsor Madeleine Winter-Schulze bought a share from Victoria Max-Theurer as a successor for Bella Rose and Weihegold. Quantaz was the 2020 Otto Lorke Prize winner (decorated to the best up and coming Grand Prix horse in Germany). In Balve he scored  83.490% for a third place but a rider can win only one medal, so there was no podium place for Quantaz.

"He did a fun test, very confident and made huge progress since Munich in the submission, throughness and his self awareness," Werth commented.

The bronze medal went to Dorothee Schneider who is not yet riding at full capacity after fracturing her collarbone seven weeks ago. Her upper body is still strapped into a safety and support vest, which limits her suppleness in the saddle. Aboard Gabriele Kippert's Hanoverian gelding Showtime (by Sandro Hit x Rotspon), Schneider rode a test full of energy, classically correct with a horse accepting and happy in the bridle contact. Only there were a few mistakes in the tempi changes and the score was 80.275%.

"Showtime has the willingness to go. He was all the time with me, except in the changes," Schneider commented. "We still need to optimalise the fine-tuning. Today I rode a little bit undecidedly. Mentally I'm struggling a bit (from the fall), so it is good for me to ride again as quickly as possible. I feel I'm on an upward curve. I feel better and more sure. The healing takes a while, this is normal." Dorothee also brought her second horse, Faustus (by Falsterbo x Forrest xx) and finished seventh with him on 76.922%.

Team trainer Monica Theodorescu was thrilled with the results in Balve.

"All riders are on best form here," said Monica. "It is normal that there are still mistakes here and there. We are only at the start of our selection process, but we're very much on schedule. All horses in the class were super. Jessica strode to a personal best, deservedly. Dalera really recovers well between shows. You can give her a holiday and then easily pick her up again. She wants to perform. Same with Showtime. This is great. Bella Rose is now 17 and her temperament is unchanged. They are exceptional horses."

From a team selection perspective it is interesting to note that Helen Langehanenberg and the Holsteiner mare Annabelle (by Conteur) landed fifth place and now have put themselves into consideration for the Olympic team reserve spot. Theyscored 77.804%

On Saturday a new set of medals is to be won in the Freestyle.