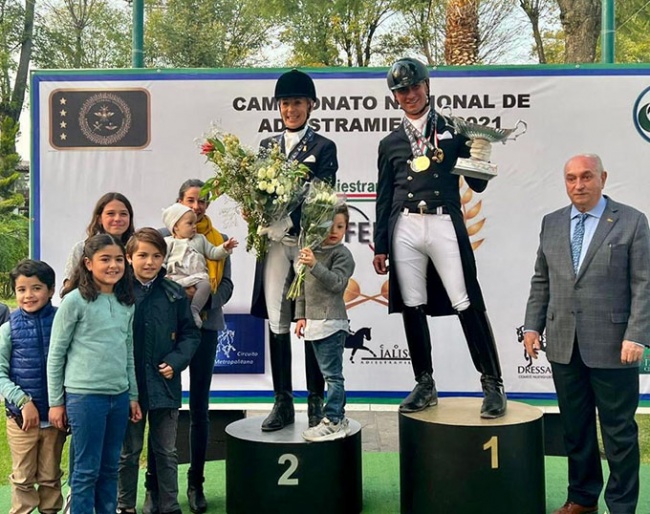 While the Grand Prix division only featured two riders, the field in the Prix St Georges was bigger. The Nationals also hosted a medium tour division.

Although for years Mexican Dressage has been trying to build a bigger group of Grand Prix riders, the Nationals this year were only able to bring afoot two pairs.  Mexico has only a handful of Grand Prix riders lost a big strength when Bernadette Pujals returned to   Spain and declared for her birth country again. Furthermore, Martha Fernanda del Valle moved to Portugal where she is building a new life and business. Grand Prix rider  Antonio Rivera did not show at the Nationals this year and Jaoa Fialho was absent two.

The two riders that did show up were Santiago Ortiz Diez and his student Lourdes Ariza Alducin. The big tour podium was decided by the combined results of the Grand Prix and Freestyle. Ortiz Diez won the title aboard Gentil SS (nu Altivo SQT x Pagode) a Lusitano stallion from Sociedade das Silveiras, which Santiago began riding just. 1.5 months before the Championship. The horse was owned and produced by Lusitanos La Fortaleza and recently purchased by BV Group. He scored 65.956% in the Grand Prix and 70.235% in the Freestyle.

Lourdes Ariza Alducin took the silver and reserve title aboard the 16-year old Oldenburg gelding Sir Cedrik H (Sir Donnerhall I x Waldsee), who was recommended to her by Steffen Peters and once shown internationally in the U.S.A by Sabine Schut-Kery. Lourdes was assisted by personal friend, Olympian José Antonio García Mena, for her warm-up. She scored 63.891% in the Grand Prix and 68.360% in the Kur.

There was one Under 25 rider making a valiant effort at the Nationals: Carolina Cordoba on the 19-year old KWPN bred Baikal. She posted 61.384% and 64.085% over the two days.

At small tour level, there were two divisions: a Prix St Georges division and a small tour division that included the Intermediaire I level test.