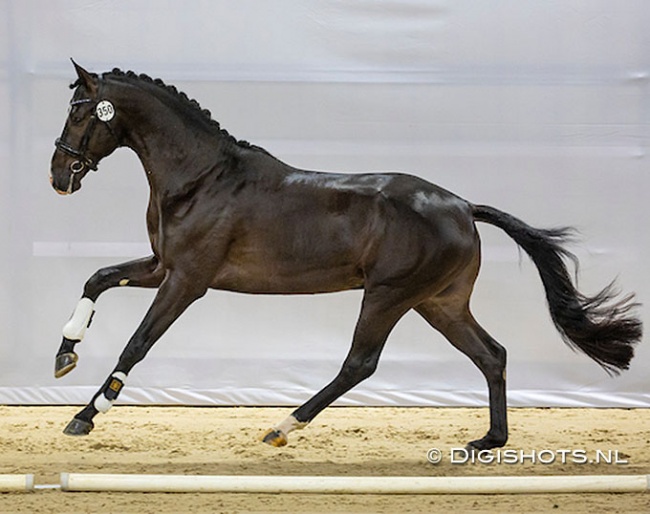 Extreme US became the high scoring stallion in a small group of just four colts that completed the 2022 KWPN Spring Stallion Performance Testing in Ermelo, The Netherlands.

Thirty-nine colts were licensed at the 2022 KWPN Stallion Licensing in February, but just nine began the mandatory spring testing in April. The other 30 can try in the autumn to full the requirements for a full breeding licensing. Of that group of nine, only four finished the spring testing.

Extreme US, What's in a Name?

Extreme U.S. is Oldenburg bred and has gone through a string of names already before KWPN and his owners settled for Extreme U.S. He was first known as El Vivo PS when he sold (in part) to Van Uytert for an online auction price of 95,000 euro. He then went to the KWPN licensing as Eurostar US, began the performance test as Easy Boy US, and now completed the testing as Extreme U.S.

"The stallion stands out with his willingnes to work, his hindleg that reaches under and his three very good gaits. That's how we want to see it," said KWPN licensing committee chair Bert Rutten.

The second highest scoring stallion was O'Toto van de Wimphof, who is by Toto Jr out of Rastede (by Riccione), the dam that also produced performance test winner Just Wimphof.  Bred by Carla Rienks-Kramer and owned by the breeder and Joop van Uytert, he scored 86.5 points.

The other two stallions that passed the testing were Osaka (by Escolar x Florencio), bred by Pegasus Stables and owned by Joop van Uytert; and Secret Lover (by Secret x Furstenball), bred by B Zumbruch and owned by Van Olst Horses. Osaka scored 82.5 points, Secret Lover got 82 points.