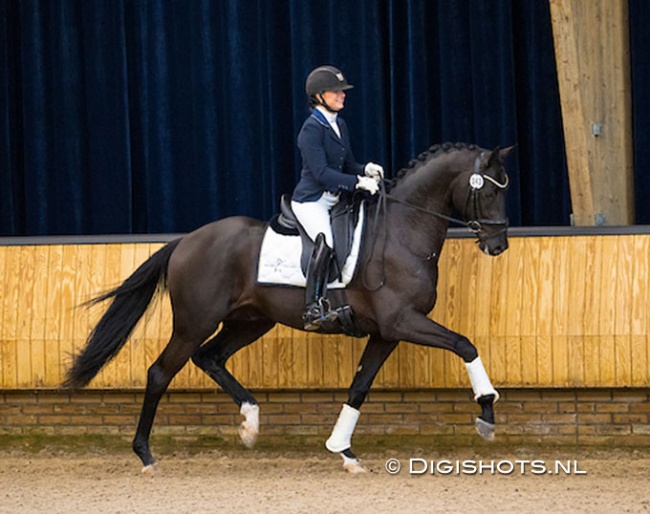 Nashville Star (by Desperados x Westpoint) became the high scoring stallion in the 2021-2022 KWPN Winter Stallion Performance Testing, which started on 28 December 2021 and concluded on 18 January 2022.

Fourteen colts began the testing in Ermelo and five were sent home mid-way. Nine completed the testing are now officially fully licensed to breed for the KWPN society.

The high scorer of the testing was Nashville Star (by Desperadous out of Ezraijgje (by Westpoint). He is bred by L. Martens and owned by Reesink Horses.

"He's a handsome, appealing stallion with three good basic gaits and a very good walk. He moves light-footedly and stands out in his ability to collect and extend," said Bert Rutten, chair of the KWPN licensing committee. He was joined by inspectors Johan Hamminga and Marian Dorresteijn.

The black stallion scored 9.5 for walk, 8.5 for trot, canter, suppleness, and self-carriage, 9 for rideability and 8.5 for dressage potential.

The runner-up with the second highest total of points was Nalegro (by Painted Black out of Jalegrofleur, the full sister of Valegro (by Negro x Gershwin). Nalegro is bred by Joop Hanse and co-owned with Gert-Jan van Olst.

The black scored 85 points in total with 8.5 for walk and trot, 9 for canter, 8 for suppleness and self-carriage, 8.5 for rideablity and potential.

At the final exam day, the committee also reserves the right to rename the stallions, often opting for anglicized versions of stallion names instead of respecting the breeder's choice.