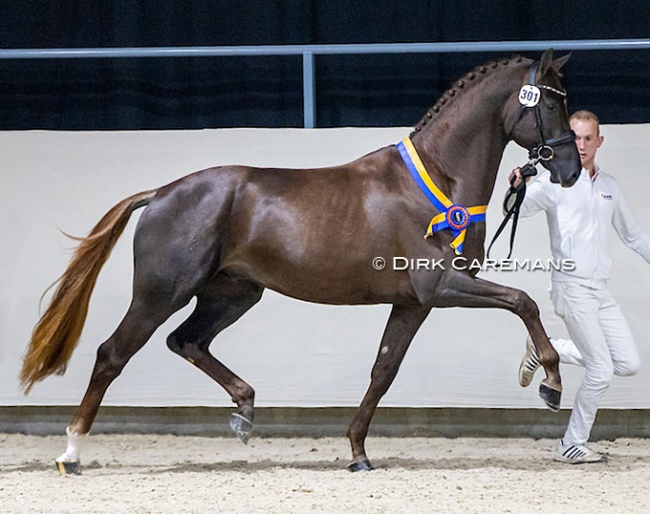 Sixteen dressage bred colts have passed the second phase of the 2022 KWPN Stallion Licensing on the second licensing day of dressage colts at the KWPN headquarters in Ermelo.

The 2022 KWPN licensing took place behind closed doors due to Covid-19 but the event was staged in a whole televised production with the licensing, interviews, award ceremonies and stallion shows streamed live.

The 39 accepted colts now have to do a mandatory stallion performance test in order to obtain full breeding status from the KWPN society.

Three of the premium colts are bred and owned by Willeke Bos: Opoque (by All at Once x Davino VOD), of whom 50% ownership sold to Helgstrand Dressage at the pre-selection; Otazu (by All at Once out of Atalinda (by Negro), the dam of Jameson; and One-Two-Three, the full brother of the licensed stallions Vitalis and My Vitality (all by Vivaldi x D-Day).

The fourth premium stallion is Omar Sharif (by Escamillo out of Khloe Platinum (by Ferguson x De Niro). The dam is the full sister of WCYH bronze medal winner Lightning Star RR. He is bred and owned by Rom Vermunt and Stal Brinkman.

Willeke Bos, the power woman behind brood farm Stal 104 in Wijdewormer, The Netherlands, is mom to Dutch children and junior team rider Lara van Nek and discoverer of the foundation stallion Vitalis (by Vivaldi x D-Day).

The 2022 KWPN Stallion Licensing have been a total conquest for Bos and her breeding programme. She presented six colts at the pre-selection in December and all six were invited to the Licensing. Of those six, five have been approved and three of them named premium stallion!

As breeder and owner of the KWPN licensed stallion All at Once (by Ampere x Gribaldi), a 12-year old black stallion that competed at the 2021 Tokyo Olympics under Dutch-Moroccan Yessin Rahmouni, Willeke Bos can add another feather in her cap: All three All at Once sons presented at the licensing were approved! All at Once's original KWPN name was Flow, but as he first got licensed in Germany, before his KWPN approval, he received a new name according to the German system (starting with the same letter as the sire).

The only colt of hers that didn't make the cut was Onassis (by Kilimanjaro out of Atalinda (by Negro).

Traditionally the auction of licensed and non-licensed stallions takes place after the announcement of the premium stallion on Saturday afternoon. However this year the auction happens online due to corona.

The "KWPN Select Sale," once a platform where top stallion stations would bid high hammer prices for these young colts, continues to loose appeal with the breeders and stallion owners. The group of colts auctioned each year is getting smaller as owners prefer to sell their horses privately instead of through the auction.

Only eight dressage colts (of which three are licensed) will be up for auction in the 2022 KWPN Select Sales. The bidding concludes on 7 February 2022.

The accepted colts at the 2022 KWPN Stallion Licensing are: