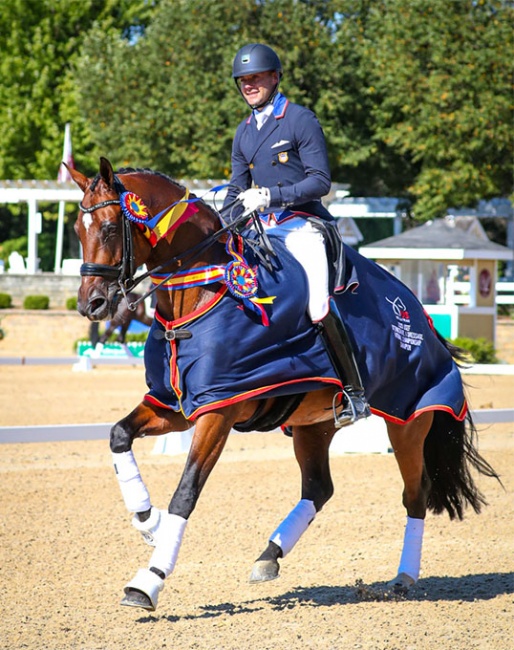 Pairing Endel Ots with a dressage horse is like getting John Travolta for a dance partner: Whether it’s Uma Thurman or Olivia Newton John, he’ll have them moving like a million bucks on that dance floor.

Which is exactly how Ots rode Sonnenberg’s Everdance to his second consecutive USEF Intermediare I Dressage national title at the 2020 US Dressage Festival of Champions at HITS Chicago at the Lamplight Equestrian Center in August: choosing the same freestyle choreography as his winning test in 2019 on Lucky Strike, but with music curated to his new ride’s own unique and dynamic assets.

“The choreography is the same but I wanted something more from the music and always liked Edward [Gal]’s freestyles full of power. Karen Robinson did our freestyle, I’m very happy with how it turned out.”

Sonnenberg Farm LLC’s 11 year-old Dutch Warmblood (by Johnson out of Raindancer S, by Zeoliet) would appear to agree. After a 74.941% in their Prix St Georges & 75.441% in the Inter 1 in Chicago, Ots and the perfectly poised bay mare set a decisive 77.645% in the Freestyle to finish more than three points ahead of all other contenders.

“We had nice, clean tests. She really tries for me. It’s been a nice partnership,” Ots said. “You always want to do the best job you can, especially for someone else’s horse because you know how much they’ve put in to breeding and bringing it along.”

Last October, Dan and Gina (Gaumer) Ruediger of Sonnenberg Farm LLC connected with Endel to organize a plan for their US bred mare. A few months earlier, Ots had qualified Lucky Strike for the 2019 Pan American Games when an unfortunate but short term injury to the horse in transit led to the decision to withdraw from the squad.

“I try to make a clear game plan, and set goals to accomplish with each horse,” said Ots. He had developed a long term program for Lucky Strike, and was just as confident he could build a similar game plan to bring the talented Everdance up “to the big leagues” of the international dressage world.

“It’s great to have such a talent from US bred horses like Everdance. I saw her strengths, so we worked on her movements, her knowing the tests, and her trusting me enough to wait for me to ask for something.  All the pieces fell into place and it’s been great.”

While Ots keeps to his plans, he hopes the rest of the world stays on its track, too. At the Festival of Champions, he said, “It was quite comforting to know that the show had good measures in place. Everyone was great about wearing masks, doing temperature checks, and operating in a safe way. As long as we keep seeing to that, shows can keep going, too.”  So that Ots, and his freestyle partner, keep on dancing.

Keep up with Endel Ots at EndelOtsDressage.com, and learn more about sales, training and development of young dressage prospects at Endel Ots Dressage in Wellington, FL.