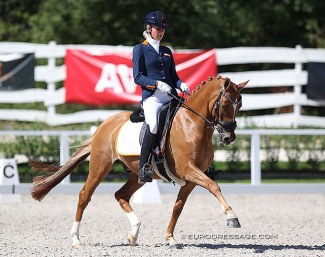 Despino is a 10-year old Rhinelander bred gelding by FS Don't Worry out of Troya (by Rosedale Tiberius x Dijon). He is bred by Alfons Baumann.

The chestnut began his show career in Germany as a 4-year old under Manon Kassner and only did a few local shows before selling to The Netherlands.

Thessa Gilbers acquired the talented young pony as her future FEI ride and trained him up the levels with the help of Dutch young/U25 rider Febe van Zwambagt.

Gilbers and Despino made their international show debut at the 2017 CDI Lier in Belgium and went on to compete at CDI's in Nieuw en St. Joosland, Compiegne, Roosendal, and Hagen, but were not selected on the Dutch team for the 2017 European Pony Championships.  They finished 2017 with starts in Waregem, Exloo and Roosendaal Indoor

In 2018 they had their mind set on that coveted team spot and performed well in Lier, Joosland, and Compiegne, but were only selected as team reserves for the European Pony Championships in Bishop Bur

Originally selected as the alternate for the Dutch pony team for the 2018 European Pony Championships, the pair was called to duty when Evi van Rooij dropped out last minute with an injured pony. Gilbers and Despino exceeded all expectations and became Holland's strongest performing pair at the Euros! They won team silver and were fifth in the individual test and fourth in the Kur.

As a matter of fact Despino had already been sold to Dutch Children team rider Lara van Nek in the winter of 2018, but Gilbers received the opportunity to finish the 2018 show year with him. Their last competition was at the end of August at the 2018 Dutch Pony Championships, where they won the gold medal and title.

Van Nek and Despino took a flying start in the autumn of 2018 and made their CDI debut just two months after the Nationals at the CDI Le Mans.  In 2019 they competed at Le Mans, Lier, Joosland, Saumur, and Compiegne but that year she opted to ride Children and was selected on the Dutch Children's team with Fariska.  Lara and Despino won silver at the 2019 Dutch Pony Championships.

In 2020, Van Nek chose ponies and got picked for the Dutch team via the two national team selection trials this summer. At the 2020 European Pony Championships, they won team bronze and placed sixth in the individual test and seventh in the Kur to Music as best scoring Dutch pair.

There will be no 2020 Dutch Pony Championships for Van Nek and Despino because the gelding has been sold to Germany.

The 10-year old Ava Sophie Osing will have a super schoolmaster to take her to FEI pony level in "Pino".