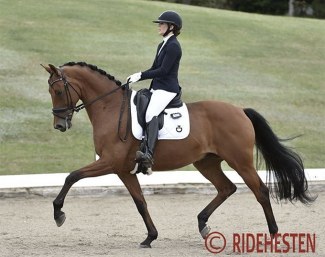 Mary, Crown Princess of Denmark, has made her dressage show debut today, 12 September 2020, at the regional show in Frederiksværk.

According to Ridehesten.com Mary and Edelman have formed a combination for a longer time, but the partnership with schoolmaster Wasabi is fairly new. Both horses were sourced at Blue Hors with Edelman being a former ride of Agnete Kirk Thinggaard and her assistant at the time, Dennis Fisker, whereas Grand Prix horse Wasabi came from Victoria Michalke to Blue Hors as a ride for Allan Gron and Nanna Skodborg Merrald. Mary is trained by Danish Grand Prix rider Karin Nissen.

Danish Royals Have a Passion for Horses

Danish Royals have a great passion for horse sport. The most notable member of the Danish royal house is HRH Nathalie zu Sayn-Wittgenstein who is a multiple Oympian, European and World Championship finalist. She is currently the Danish Grand Prix dressage team trainer. Nathalie's mother, HRH Princess Benedikte of Denmark, is an avid horse breeder in her own right and honorary president and patron of the Danish warmblood society, World Breeding Federation of Sport Horses and Global Dressage Foundation.

Crown Princess Mary has had a keen interest in horses from the start and used to be a hunting rider in Australia. She met Prince Frederik at the 2000 Olympic Games in Sydney. They have four children: Christian, Isabella, Vincent and Josephine. Daughter Isabella was on hands with the horses at the show.

More Photos of the royals on the Ridehesten website © Ridehesten.com