From Flying Past to Flying Change - Interview: Rozzie Ryan on Thoroughbreds 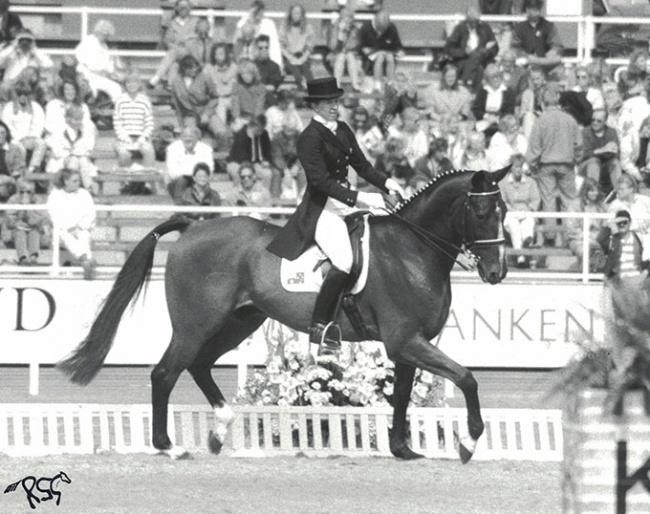 This interview is a continuation of the series "From Flying Past to Flying Change: Thoroughbreds in Dressage Competition."

It Was Never to be Again

While Judy Mackay was the first Australian rider to represent the Fifth Continent at international championships (Olympic Festival Goodwood 1980) with her stock horse Debonair, Australian individual riders competed at the 1984 and 1988 Olympic Games on Australian bred thoroughbreds.  Well into the 1990s these horses were no uncommon sight in Australia whereas today the warmbloods rule, like everywhere else on the globe.

One of Australia’s most accomplished and experienced international dressage riders, Rozzie Ryan, launched her dressage career on an Australian thoroughbred called Stirling Wilton xx. Both were members of the first Australian dressage team ever which competed at the 1990 WEG in Stockholm.

ED: Rozzie, you were still an eventing rider when you first met Stirling Wilton. What made you turn to dressage?

Rozzie Ryan: I was still eventing when Wilton and I first met. I had not been in Australia all that long and was struggling with the change of environment in the eventing scene. Wilton was a reluctant eventer but showed talent on the dressage side. He and I finished our eventing days at approximately the same time and settled down to do some more serious dressage.

ED: Was the thoroughbred the common horse to look for, for dressage in Australia, at the time when you started your dressage career?

Rozzie Ryan: This was the early 1980s and good thoroughbreds were readily available, pretty inexpensive to buy and warmbloods were scarce. The ones available were more of the old fashioned type.  We were used to riding hot, sensitive, forward thinking horses so certainly our style was more suited to thoroughbreds.

I think 1990 was the last time our team was so heavily weighted towards the thoroughbred. On that team we had two thoroughbreds, one imported warmblood, an Anglo Arab and a stockhorse- quarter horse -thoroughbred cross! It was never to be again.

Rozzie Ryan: Stirling Wilton was bought from Marion Squire who had been show jumping him. At the time Heath and I were working for Robert and Judy Mitchell who owned the NSW Equestrian Centre (NSWEC) at Lochinvar. Wilton was bought for their son Stuart but it was not a great match. I took over the ride. Wilton and I learnt together. Not always the best scenario but there was no other path. Heath was always a big influence. Just do it was his motto. Jennie Loriston -Clarke visited the NSWEC in its early days and helped me a lot. She was also someone who just got on with the job of training the horse you had. Something I still believe in.  Jennie was such a great horsewoman and an encouraging coach. On her second visit a year later she told me that she was glad to see I had got the one time changes with Wilton. She had nearly told me that she did not think this was going to be possible with this horse. Thank goodness she didn’t tell me that, because I had persevered through complete ignorance, not knowing how I would get them or how long it would take! Another good lesson.

Wilton was a wonderful thoroughbred who had raced (fairly unsuccessfully) until he was seven. He was sensitive, a little nervous but with a heart as big as a lion. A true gentleman. Once he understood what was wanted of him he would have died trying for me.

I adored him and that’s what I love about the thoroughbreds. Their incredible generosity and bravery. He was also very tough physically. He was 17 years old when he went to WEG Stockholm 1990. On his vet exam before he left Australia, the vet said that he could not make him lame on a flexion test. Wilton needed to be a fighter because we had a super difficult trip to Europe. It was the first time a team had left Australian shores and I guess there were a lot of unknowns. What were we thinking? We left from Sydney, going via Auckland, Honolulu (guava juice and tropical flowers), Anchorage (snow covered mountains) Stansted and finally 52 hours later to Frankfurt. At the time it was the only way to go but Wilton got travel sickness which we did not then know a lot about. He seemed to recover well, but it took its toll. In hindsight it was more serious than we understood.

The whole trip was a massive learning experience for all of us. Anne Honner who has sadly passed away, Glennis Barrey, Peter Weston, Gill Rickard, Clemens Dierks our coach, Wanda Nelson our Chef, Dennis Goulding our vet, Sarah Tweedie our long suffering groom and I actually had an amazing time. My favourite pre WEG competition was at Goodwood with my whole English family there. That arena was wonderful. My father died the following week which was the week before WEG, so Stockholm itself seems a little surreal but still fabulous. Wilton, true to his thoroughbred traits pulled out his best test and I was thrilled with him. I remember watching Nicole Uphoff and Rembrandt and being completely enthralled. I was hooked on dressage. It was also an Australian family affair with Heath, my husband riding Stirling Goshawk, another Australian TB, in the Australian eventing team and Rod Ryan, Heath’s father in the driving with Sue Ryan as navigator and Matt Ryan, the youngest Ryan brother as ballast! I remember the WEG was very well organised, the beautiful old city in the Gamlestan and the very elegant ladies driving us all in Volvos.

ED: Has the enormous development of international dressage sport in regards to horse quality made it impossible to successfully compete a thoroughbred at international level?

Rozzie Ryan:  I think it is hard to find a thoroughbred to compete with warmbloods at a serious Grand Prix level. If I could find one I would. We still train our thoroughbreds to Grand Prix. Mainly the eventers. Emma Bishop recently took her thoroughbred Voortrekker, a World Cup winning eventer to Grand Prix and Sappho Ransan Elliot took Heymish from a Grand Prix CDN to a four star event a couple of weeks later.

Everyone learns from it, but on the whole the thoroughbreds lack the power and suppleness of the warmbloods. They are built for speed, not spring or huge collection. I still love riding them and enjoy and respect the horses that I have had who are very thoroughbred influenced. Exellent who was by Saros was a firm though extremely hot favourite and GV Bullwinkle who was reserve for London 2012 was out of a TB mare and what a huge heart he had.

Thoroughbreds don’t give up and don’t run out of energy. They are kings when it comes to those qualities.