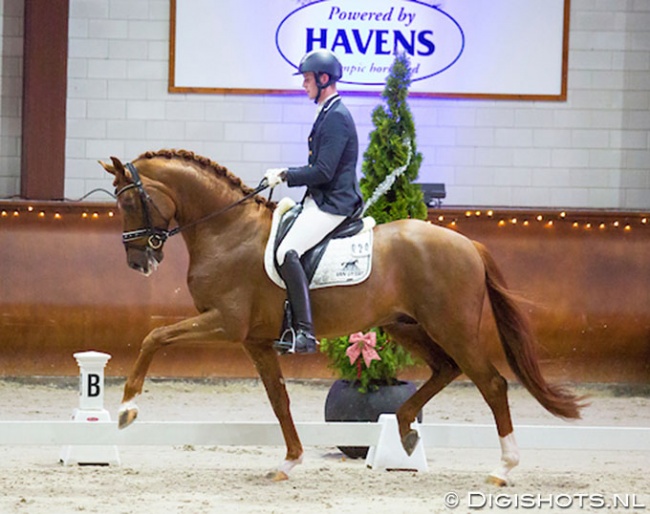 Furst Jazz is by Furst Romancier out of Borendy (by Painted Black x Jazz) and is bred by Pegasus Stables in The Netherlands. He is owned by Paul Schockemohle and Joop Van Uytert.

The chestnut was originally named Inverness P, but received a German name when he was refused by the KWPN society but approved in Germany with the Westfalian, Oldenburg and Hanoverian studbook.

The stallion was first licensed with the small Mecklenburg society in Redefin in November 2015 and was initially entered for the 2016 Hanoverian saddle licensing but dropped out. He was represented and accepted at the 2017 Hanoverian saddle licensing. He did his 14-day suitability test in April 2016 in Schlieckau and scored 7.8. He did his Sport Test in March 2017 in Verden and scored a modest  7.77 total. In 2019 Furst Fabelhaft (by Furst Jazz x L'Espoir) was named champion of the 2019 Zfdp Stallion Licensing.

In September 2017 Diederik van Silfhout received the ride on the then 4-year old Furst Jazz and presented the stallion in the 2018 KWPN Stallion Competition. In the spring of 2020 Dinja van Liere took over the ride, but she lost it again when she accepted the job of head rider at Reesink Horses.

A couple of months ago Furst Jazz moved to Danielle Heijkoop's yard, but she also announced his arrival this weekend on Facebook. The former Dutch team rider has partnered with Van Uytert before in small tour mare Daula II. She also trains Deparon U.S. (by Deveraux x Londonderry).

Heijkoop and Furst Jazz' show debut will have to wait as the rider is 6 months pregnant.