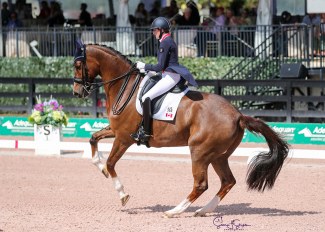 Week five of the 2021 Global Dressage Festival (GDF) concluded on Sunday, February 14, with another victory for Canada’s Brittany Fraser-Beaulieu and All In in the World Cup qualifier Grand Prix Freestyle.

“I’m so happy,” began Fraser-Beaulieu. “This is like a dream come true, to be back here with a personal best. At the five star and the Nations Cup last year we had great rides, and after such a long break you hope that it’s going to be the same, but after 10 months I was a little nervous. You want to keep those scores and keep hitting personal bests, and All In has come out this season and really proven that he knows his job so well. He tries his heart out for me every time we go down centerline, and I just have to hang on for the ride. I’m ecstatic with him.”

Fraser-Beaulieu rode to a freestyle created by Joost Peters, with Celine Dion music beginning and concluding the ride. “Joost Peters made new music for me for the Nations Cup last year,” she explained, “so this is only the second time I’ve ridden to this new freestyle. I love Celine Dion. My husband is French, I live in Montreal now, and I love the song, so I asked him to incorporate it into the beginning and the end, and I think he did a great job.”

Fraser-Beaulieu’s artistic percentages were all in the 80s, and she elaborated on her horse’s highlights throughout the ride.

“I thought my extended trots today were nice. My changes and pirouettes, I was very happy with them,” she continued. “I felt that the whole freestyle really flowed today. I wanted to go mistake free again today. He was a little nervous in the first piaffe and pirouette, so I had to make it a bit bigger than I would’ve liked, but we were with our music, the whole test flowed nicely, and sometimes that last extended trot is exuberant, but everything worked really well today. I came out with a 17-minute warmup, and thought maybe I could’ve done even less. All of these things are learning opportunities. He’s 16, and I thought I’d have him all figured out by now, but each show you learn something new!”

After being a part of impressive performances from Canadian riders all week, the 32-year-old said, “I think Canada is really strong right now, maybe the strongest we’ve ever been, and we’re getting great marks and are all so supportive of each other. If Tokyo happens, I think we will have a very strong team for Canada.”

President of the Ground Jury, William Warren (USA), noted the quality of the day’s class and of the pair’s ride. “For me,” he said, “the entire class was a nice quality to judge. It challenged us judges to up our game and really get it right. Brittany hit a lot of strong technical points, and to really have a good freestyle, it has to be technically solid. Today everything was spot on. That really supports the artistic side of the freestyle, because if the ride has technical issues you have a problem. There was wonderful harmony between horse and rider.”

GDF Director of Sport Thomas Bauer concluded with remarks about the current state of points for the North American League, saying, “I’m quite happy with it so far. It looks like it will be quite the competition with the new system for the North American League. It’s still not a perfect system, but it’s better than it was before, and is now up to the last show to decide who goes to Gothenburg.”

In the Intermediaire II 3* the USA’s Mikala Münter earned the win aboard her own Skyfall, a 2008 Oldenburg gelding by Zardin Firfod, with a 66.500%.