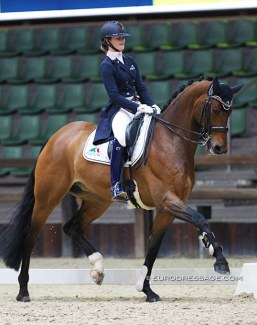 Grand-Charmeur is a 10-year old Dutch warmblood gelding by Apache out of Proza (by Cocktail). He is bred by Mr. Heeren.

The horse was originally owned by Ad Valk, but Micky's parents Luc and Jonna Schelstraete acquired an ownership share in the bright bay when he was 4.

Under Jonna Schelstraete, the bright bay gelding placed fifth at the 2017 Pavo Cup Finals. They also competed at the CDI Compiegne in the 6-year old tests.

in 2018 they entered the Dutch team selection process for the World Young Horse Championships in Ermelo, but did not make the cut. Jonna rode the horse at CDI's in Waregem and Le Mans in the autumn of that year, before handing the ride to her daughter.

Coming off ponies, Micky Schelstraete made her transition to junior level with Grand-Charmeur in 2019.

At their first international in Lier, the won the team championship test with 71.616%. That year they also rode in Nieuw en St. Joosland, Saumur and Exloo and despite consistent seventy percentage marks were not selected on the team for the 2019 European Junior Riders Championships in Italy. They finished the year winning the CDI Waregem and Aachen Indoor.

In 2020 the pair rode in Lier and did the national Dutch team selection trials for the European Championships, but were named team reserves. At that time, they notified the Dutch Equestrian Federation that they would not be available as reserves as the horse had been sold. however, the sponsor of that buyer pulled out and the horse was not sold.

Micky rode her last CDI on Grand-Charmeur in Le Mans last October, where they were third.

Grand-Charmeur has now been sold to an amateur dressage rider who trains with U.S. A-squad rider Katherine Bateson-Chandler. The horse was test ridden by a friend as Bateson did not want to fly to Europe due to corona restrictions.

The name of the new buyer remains undisclosed.

"It’s a friend I have had for more than 27 years from when I groomed for Robert (Dover)," Bateson told Eurodressage. "She stopped riding almost 18 years ago. We always kept in good contact and she decided she wanted to ride again so we found her the perfect horse!! The plan is for him to stay in my program and for her to start riding again with him! Really fun!!"

Schelstraete told Horses.nl that they agreed to sell the horse because they are extending their yard with a new stable, expanding from 18 boxes to 29.