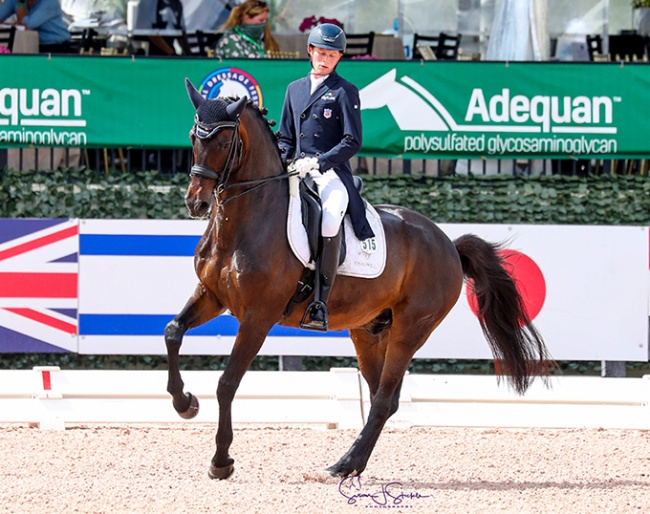 Week seven of the 2021  Global Dressage Festival concluded on Sunday 28 February 2021 with a win for USA’s Benjamin Ebeling on Illuster van de Kampert in the Grand Prix Special 3*.

“It’s really a testament to my coaches and the team behind me,” expressed Ebeling. “For me, it’s really important to give thanks to them. They help me so much day to day, and I wouldn’t be here without them.”

The high score was also a personal best for Ebeling and the gelding, their second of the week after placing first in Friday’s Grand Prix 3* with a 73.326%.

“Today was the most comfortable that Illuster has felt in that arena,” said Ebeling. “Of course, it’s a big atmosphere for any horse, but he’s naturally a hot horse. The arena can be a bit of a challenge for him. Every time we go in there he’s settling down and for me mentally, that’s a big win. Today his strength was definitely in the canter work. The first trot half-pass I was very happy with, and that last centerline is always so fun to ride too.”

The pair made their senior international Grand Prix debut at GDF this season after competing in the Under 25 division and have notched several top placings since, with the day’s Special marking their third big tour win.

Ebeling explained, “Usually I’m talking to Robert Dover the night before a test, and one thing that he’s always telling me is maintaining a good connection with power and collection. It’s something that we talk about often, and I really feel like I brought that into the arena today.”

Susan Dutta on the Rise

Second place in the Grand Prix Special  3* was awarded to Susan Dutta (USA) on Don Design DC, Susan and Tim Dutta’s 2010 Hanoverian gelding by Der Designer with 70.893%. Dutta also placed second in the Grand Prix for special earlier in the week on a personal best score of 71.304%.