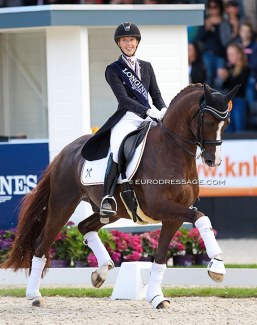 Sultan des Paluds is an 11-year old French bred Hanoverian by Soliman de Hus out of Wanja (by De Niro). He is bred by Pablo Bouillot.

Born and reared at Bouillot's Haras des Paluds in France, Sultan was first competed in France by Isabelle Pinto.

The pair made its show debut in the 4-year old tests at the national in Cluny in July 2014, winning both tests. They also competed in Vidauban that year as well as at the 2014 French Young Horse Championships where they won silver.

In 2015 the pair continued their successes in the 5-year old division and represented France at the World Championships for Young Dressage Horses in Verden, Germany, where they placed 17th in the consolation finals. At the 2015 French Young Horse Championships they scored the bronze medal.

In 2017 Bouillot decided to send his chestnut gelding to The Netherlands and put him in training with Kirsten Brouwer at Platinum stable.

Brouwer steered Sultan des Paluds to a silver medal at the 2017 World Championships for Young Dressage Horses in Ermelo.

Ermelo in August 2018 was the horse's last international start in his career, so far.

Brouwer trained him to Grand Prix level and rode a few shows in The Netherlands. In 2019 they tackled some Intermediaire II classes and in September 2020 they had their national Grand Prix debut, scoring 71,993%. One month later they scored 70,978% in another Grand Prix test.

In December 2020, Bouillot decided to send Sultans des Paluds as a sales horse to Helgstrand Dressage in Denmark. Andreas purchased an ownership share.

Within one month the gelding sold to British junior rider Annabelle Pidgley.

Dressprod first reported the news. The FEI database lists the sale of the horse on 15 January 2021.