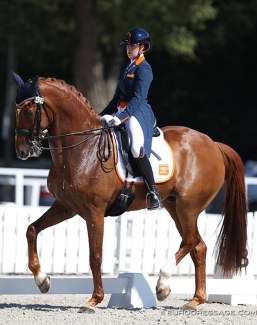 Dutch Grand Prix rider Jeanine Nieuwenhuis has announced that her number 1 in the barn, TC Athene, has been retired from competition sport, effective immediately.

TC Athene is a 16-year old Dutch warmblood gelding by United out of Orleans (by Jazz x Ulft). He is bred by Jan Streppel and owned by Tim Coomans.

The tall and impressive chestnut stallion has been successful from the start.

A year later Gerdine Maree took over the ride. They were in the running for Dutch team selection for the 2010 World Young Horse Championships in Verden, but had to pull out of the running due to an injury. In 2011 they were selected on the team and finished 12th in the Finals in Verden.

In 2015 he was allocated to Dutch junior rider Jeanine Nieuwenhuis. The pair

They won the 2018 Dutch Indoor and Outdoor Under 25 title and at the 2018 European Under 25 Championships in Exloo they again collected team silver and  placed 10th and 8th in the individual rounds.

In 2019 they were undefeated at the European Under 25 Championships in San Giovanni in Marignona, winning team silver and double individual gold. They also added the 2019 Dutch Indoor and Outdoor U25 Champion's title to their tally.

A Matter of the Heart

"In the year that The King turns 16 we have decided after careful consideration to retire him for competition sport," Nieuwenhuis stated. "After a routine check by team veterinarian Edwin Enzerink, he got a remark on his heart. It is not life threatening, but to play at top level is too risky."

Jeanine will continue to ride him at home, for fun.

"It certainly is a very difficult decision, but the wellbeing of Athene always comes first," said Jeanine. "He's still in super fine condition and we'll enjoy him at home."