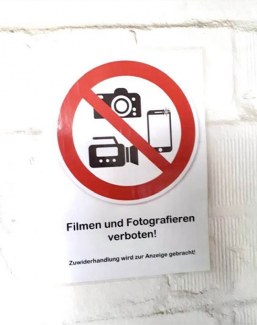 The Warendorf state stud continues to be plagued by scandals. After director Susanne Rimkus was fired and convicted for fraudulent money management, her replacement Kristina Ankerhold has now fallen into disrepute over videos which show her applying questionable training methods on young stallions.

The ball got rolling when a Facebook post showed a prohibition signs, forbidding photography and videography in Warendorf. The sign was only recently hung at the Warendorf state stud. The by-line "violation will be reported" was included on the laminated A4 signs.

Ankerhold imposed this new rule in response to allegations made of her endorsing and promoting questionable training methods on horses.

The "Landgestüt Warendorf" is a public institution, paid with tax payers money. The new prohibition signs wire the smoke that came from a fire that has caused much upheaval in Germany the past two days.

German equestrian magazine St. Georg reported that on 13 April 2021 videos were made of Kristina Ankerhold coaching a rider on two young stallions, one pulled tight in draw reins, the other ridden in a hyperflexed fashion.

The training took place in the "German Riding School" which is located at the state stud and part of the FN educational department, where riders are trained to become teachers (Pferdewirtschaftsmeister). At the same time, there were twelve to fourteen participants in the master’s course in the riding arena. They judged the training methods with the two stallions to be unacceptable and relevant to animal welfare.

The two training sequences were filmed by several people. An FN employee, who was also on site witnessed the incident, informed the head of the FN training department, Thies Kaspareit.

Thies Kaspareit, head of the training department of the German Equestrian Federation, saw the videos and on 15 April a conversation took place between Kaspareit, Ankerhold and the rider.

According to St. Georg, Ankerhold admitted to Kaspareit that the horses were "certainly too tight" in the neck, bu that it was due to "circumstances" them being young stallions. "It couln't be any other way," she stated.

Kaspareit made an appointment to go and inspect the two stallions in Warendorf followed up by a latter sent on 7 May in which it is said that the type of training is not "relevant to to animal welfare."

This incident is not the first, which puts Ankerhold in a bad light. On social media more testimonies are given of her condoning unfriendly horse riding, particularly at the Bundeschampionate qualifier held in Munster last year.

St. Georg stated that Ankerhold has now decided as counter measure to have German youth team trainer Hans-Heinrich Meyer zu Strohen to supervise the training of the dressage stallions in Warendorf.

Hannes Müller, the director of the German Riding School, did not witness the events on 13 April. According to insiders a troubled relationship between the Stud and the School has been going on for a while.  To obtain a good co-operation between the two, "we have to pull together professionally and cannot got through the country with two different ideas about correct equitation for the long term," said Kaspareit.

The German Equestrian Federation issued a public statement on 12 May condemning the training methods.

However, "in order not to burden the continuation of the talks, Thies Kaspareit initially showed himself to be open to the request from the FN to delete the video material available. After further consultation, the association has decided to keep this material until further notice. Irrespective of this, the FN first informed the responsible state commission of Westphalia verbally about the incidents on May 6th, so that the state commission can check whether a regulatory procedure should be initiated."